A global deal on climate change will be reached at Paris summit in 2015, says Ethiopian negotiator

Tewolde Egziabher questions how effective such a deal will be 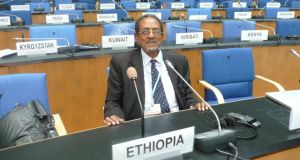 A global agreement on climate change will “definitely” be reached in 2015, according to Ethiopia’s chief negotiator Tewolde Egziabher. “The question is how effective an agreement it will be,” he told The Irish Times .

“My expectation is that we will come out with an agreement [at the UN climate summit in Paris towards the end of 2015], but a number of countries will fail to ratify it and, in any event, its effectiveness will not match the change which is looming.”

The issue couldn’t be avoided “because we see the climate is changing and the weather is becoming more erratic than ever. And if it has changed so much in our short lives, how much is it going to change in future for our children and grandchildren?”

Mr Egziabher (73) has been involved in international negotiations on environmental issues since the late 1980s and, in his experience, “things move much faster in other areas”.

Known to everyone by his first name, Tewolde said: “I’m pretty certain this is due to economic factors, because any decision we take has so many implications for our economies that we keep repeating the same thing again and again.

“I’m afraid I’m being cynical. I wish it would be otherwise and there was more hope,” the softly spoken diplomat said sadly. “We sit here and talk, talk, talk but there is little sign of action to match the scale of the challenge we face.”

He complained that “we don’t bring anything new because we don’t want to talk about anything new” – such as solutions based on carbon quotas, allocated on an equitable basis. Yet his own country aims to be “carbon neutral” by 2025.

Tewolde has played a role in negotiating international legal instruments such as the UN conventions on biodiversity, desertification and the trade in endangered species. But they were all “much more narrow” than climate change.

He describes the 1987 Montreal Protocol on the ozone layer as “the only really successful environmental convention . . . because the thinning of ozone layer was at the north and south poles, and it was going to effect richer countries the most. Thus, it was made to work.

“But now the reverse is true – the greatest impacts of climate change are being felt in the poorest countries of the world. We have made some very serious suggestions about what should be done, but is anyone listening to us?”

These proposals include setting a global “ceiling” on greenhouse gas emissions so that the average surface temperature would not rise above 1.5 degrees and then allocating these emissions on a “fair and equitable” per capita basis worldwide.

“That’s the kind of international law we should have,” he said, adding that he hoped to continue as Ethiopia’s chief negotiator, at least until 2015.