EU forced to confront fallout from breakdown of agreement with Ukraine

Sanctions may be considered for the first time 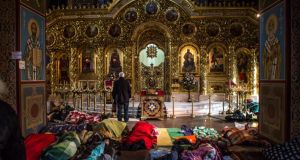 Anti-government protesters sleep on the floor inside the Mikhailovsky Monastery, which has been converted into a makeshift hospital, in Kiev. Photograph: Brendan Hoffman/Getty Images

Ever since the European Union’s steady progress on an association agreement with Ukraine fell apart in November, the question of the EU’s response to events unfolding to its east has hung uncomfortably in the air.

Yesterday, that question was forced into the open following the escalation of violence in Ukraine which left more than 25 people dead.

Just before midday, European Commission president José Manuel Barroso delivered a video statement from Brussels, expressing his “shock and dis- may” at the events and asserting, in his strongest comments yet on the matter, that “no circumstances that can justify such scenes of violence”.

The EU’s foreign policy chief Catherine Ashton has convened an emergency meeting of foreign ministers in Brussels today, which will be attended by Tánaiste Eamon Gilmore and his counterparts from across the bloc.

As protests have continued in Kiev over the last three months, the EU has faced calls to increase pressure on President Viktor Yanukovich, not least from the European Parliament which has been calling for more intervention.

The word on everybody’s lips is sanctions. As Moscow released a tranche of its $15 bil- lion aid package to Ukraine hours before the crackdown on Tuesday, the EU appeared to be seriously weighing the possibility of imposing financial sanctions on Ukraine for the first time.

Up to now, Europe has stopped short of implementing punitive measures on the former Soviet republic, instead opting for the path of soft diplomacy. Both EU foreign policy chief Catherine Ashton and enlargement commissioner Stefan Füle have been travelling to Kiev, issuing carefully worded statements as the violence flared.

Individual countries across the Union, including Germany, Poland and France, yesterday spoke out strongly against Yanukov ich , suggesting a decision on some form of targeted sanctions is likely today. Just a month ago, virtually all member states were opposed to the idea of sanctions, favouring diplomatic engagement instead.

The imposition of other restrictive measures, including a travel ban on individual figures such as the president, as well as a freezing of his assets, will also be considered.

The deepening crisis has turned the spotlight on EU foreign policy. The escalation of violence right on its doorstep brings to mind uncomfortable memories of the Balkans when the EU was widely criticised for not intervening.

The union is indelibly involved in the Ukraine crisis ; Ukraine’s rejection of the trade deal with the EU in November was the direct catalyst for the wave of violence.

Over the last five years, the EU has been engaging with Ukraine, Armenia, Azerbaijan, Belarus, Georgia and Moldova as part of the so-called Eastern Partnership process . In doing so, the EU has involved itself in the politics and decision-ma- king policies of those post-soviet states. In this sense it can be argued that it has a responsibility to act over events in Ukraine.

Critics over the last few months have accused the EU of naivety in its discussions with Ukraine in the months leading up to the Vilnius summit in November. Many believe that Yanukovich was stringing EU negotiators along, trying to extract the best possible terms from the EU on an association agreement to leverage a better deal with Russia.

EU officials insist that Brussels is taking the long view by refusing to bow to Ukraine’s demand for more concessions and insisting that the door to EU membership remains open.


Renewed push
In the background it has also made a renewed push with Georgia and Moldova on association agreements, in a bid to maintain momentum on the Eastern Partnership process. Similarly, the example of Belarus – where restrictive EU measures have failed to generate any substantial results – has also influenced foreign ministers’ reluctance to impose sanctions.

Nonetheless, the escalation in violence over the last 48 hours may force the EU’s hand to activate punitive measures.

The time for diplomacy may have passed.