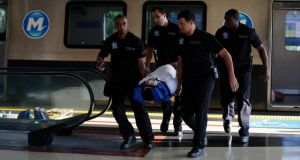 As is now traditional before any modern sporting mega-event, Brazil’s authorities have been busy in the build-up to World Cup emphasising that the party will take place under the watchful eye of a massive security operation.

To protect fans and avoid any trouble with anti-World Cup protesters, 157,000 police and soldiers will be deployed across the country, along with fighter jets, naval frigates and drones. In all, the federal government says spending on securing the event has topped €620 million.

Brazil seems particularly determined to emphasise such preparations, as it knows it has a certain image problem. If terrorism was the major reason for the huge security operations at the most recent Olympics in Sochi and London, in Brazil the motive is the country’s high levels of urban crime.

In recent decades gun-toting gangs of teenage drug dealers have joined other staple images of the country, such as carnival and tropical beaches, in foreigners’ minds.

Those worries have now meshed with the recent threat posed by fringe groupings of violent anarchists which have carried out isolated acts of vandalism at anti-Cup protests in recent months. Masked, unnamed protesters have spoken to local media of bringing “chaos” to the event.

But despite their stated hopes of being assisted in their ambitious goal by the country’s most powerful criminal organisation, São Paulo’s Primeiro Comando da Capital (First Command of the Capital, or PCC), the chances of this happening are slim.

Brazil has a good record of having large public events pass off relatively peacefully, largely thanks to saturation policing. Though none reached the same scale of a World Cup, in recent decades the country has organised peaceful global summits on the environment, papal visits and sporting events.

Even the protests that took place during last year’s Confederations Cup were largely peaceful, with much of the violence that did take place provoked by aggressive policing.

But the justice minister’s claim that the security operation for the World Cup will leave a security “legacy” is doubtful, say security analysts, who cite deep structural problems, such as antiquated policing structures and a broken courts system, as well as a lack of funds, as the causes of Brazil’s violence epidemic.

“Without them we are left with a criminal justice system that does not work. It is totally inefficient and this creates a lack of credibility and sense of impunity among criminals and rogue elements in the police.”

That impunity is illustrated in the Latin American Studies Centre’s annual Map of Violence report from last year which showed more than 36,000 people had been shot dead in Brazil in 2010. With a homicide rate of 20.4 deaths per 100,000 inhabitants, the country ranks as the eighth most violent among 100 countries for which there are reliable statistics.

A similar study by the UN’s Office on Crime and Drugs found 11 of the 50 most violent cities in the world are located in Brazil, including seven of the 12 that will host World Cup games: Fortaleza, Natal, Salvador, Cuiabá, Manaus, Recife and Belo Horizonte.

In recent years some Brazilian states – whose governments are mainly responsible for public security – have made progress in reducing violent crime.

Most impressively, in little over a decade, São Paulo has seen its homicide rate drop by 68 per cent to 10.5 killings per 100,000 inhabitants a year. Though still over 10 times the Irish homicide rate it now boasts the safest state capital in Brazil.

But set against this progress has been a rapid deterioration in other regions. In Fortaleza, which will host six World Cup matches, the homicide rate increased 206 per cent between 2000 and 2010, a pattern being repeated in other cities in the northeast.

This migration of violence from the relatively wealthy southeast to the poorer northeast and north of the country is being driven by the spread of the drug trade from its heartland centred on the São Paulo- Rio de Janeiro axis and poses a severe challenge to the public security apparatus that security spending on the World Cup will do little to resolve.

“It is no coincidence that the state of São Paulo has managed to bring down its murder rate because it is the richest state in the country. But no other state can dream of investing the same amounts of money in order to bring down their levels of violent crime. Thus when violence takes hold in these poorer regions it can quickly spiral, as the states there are totally unequipped to combat it,” says Marcelo Neri of the Nucleus of Violence Studies at the University of São Paulo.

For now the authorities are confident that its massive security operation will guarantee the safety of fans attending the Cup. But it remains another short-term solution that despite the money spent is likely to offer little help in Brazilians’ desperate quest for a safer society.