As peace talks go on, so does the human tragedy that makes them necessary 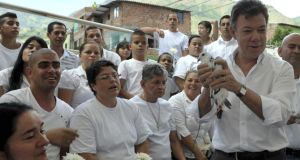 That evening, her father, a liberal, took her to a safe location in the city. “I had to jump over the bodies as we ran through the streets,” says the 87-year-old. Over the next five years, 250,000 people were killed as liberals and conservatives went to war.

In their home village of Coper, Boyaca, Clara’s sister, aged 11, was shot dead as she tried to bolt the door of the family shop against a group of rampaging conservatives. Her mother fled with only the clothes on her back, joining the family in Bogotá. The family’s land and possessions were sold off in their absence at giveaway prices. They never went back.

Colombia’s violence has shifted location over the years, but the cycle of killing and displacement goes on, leaving 230,000 dead and six million people uprooted since 1958.

Colombia’s liberals and conservatives settled their differences, aggressively excluding all other parties from government. The rebel Farc movement was established in 1964, but the struggle for a socialist alternative generated more violence and displacement as the rebels turned to kidnapping and drugs to finance their activities.

Colombia’s president, Juan Manuel Santos, elected in 2010 and re-elected last year, launched the current peace process, in which Farc declared a unilateral ceasefire and an end to kidnapping. In March, Santos sent top army officials to the peace talks taking place in Havana, Cuba, preparing the way for a bilateral ceasefire.

A fresh crisis began last week when Farc broke its ceasefire, ambushing and killing 11 soldiers in rural Cauca province. Santos ordered the resumption of air raids against the rebels, but also pledged to stay at the negotiating table while calling for deadlines to be imposed on the process.

Colombia’s second rebel group, ELN, of lesser influence, is expected to join the talks at a future date.

“The greatest works of humanity initially seemed impossible,” says Iris Marin, Uariv vice-president. “But if we don’t believe change is possible, we may as well resign ourselves to a country which is forever in pain.”

There is a vast gulf between the hopes and experiences of most Colombians. Despite the peace talks and the demobilisation of right-wing paramilitaries, 15,000 people a month have been uprooted over the past two years, due largely to guerrilla and mafia-related violence.

On a visit by The Irish Times to an emergency centre for the displaced in Bogotá, Javier Reyes arrives with his family from Bolívar, six hours away. Reyes was ordered off his small farm by guerrillas and, like Clara’s mother more than 60 years ago, fled with almost nothing. Reyes, his wife and three children clutched a handful of food vouchers and a map of Bogotá’s transport system.

In the short term the family will live in emergency accommodation, sharing a single room until they find lodgings, most likely in Bogotá’s impoverished and overcrowded southern barrios. The family must find a school for their two daughters, while their 17-year-old son faces a tough time finding a job. Official statistics show that 80 per cent of the displaced live beneath the poverty line, suffering discrimination and marginalisation.

At a hostel for the displaced, the manager, who prefers to remain anonymous, says that most of the residents suffer from depression and few manage to rebuild their lives. The shelter itself resembles a prison bunker and visitors are greeted by a small peephole in a steel door as gunmen have previously called to settle scores postponed by emergency departures.

Asked whether he as faith in the peace process, Javier Reyes scoffs. “Peace in Colombia? There will never be peace in this country,” he says.

The outlook remains uncertain, but Colombians, overcoming their initial pessimism, are beginning to believe. A poll in March revealed a 72 per cent public approval rating for the peace talks, up 11 points since December.

There are plans to form a truth commission, where all parties to the conflict will have the opportunity to reveal information in return for amnesty and token punishment.

“At some point we have to choose between sanctioning the past and enabling the future,” says Óscar Arias, Nobel Peace Prize winner and former president of Costa Rica.

“Who knows what’s in store for this country?” says Clara Silva de Santos, sitting in the same modest home in Fontibon, Bogotá, where her parents settled after fleeing the violence in 1948. “I have serious doubts about the peace process and I don’t expect a happy outcome.”