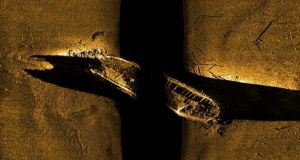 Canadian explorers have found the wreck of one of two ships lost in the 1845 Franklin expedition to Canada’s Northwest Passage, solving an enduring historical mystery and bolstering Canada’s claim to the key Arctic trade route.

Sir John Franklin and his 128 crew in the British ships HMS Erebus and HMS Terror were seeking the fabled Northwest Passage between the Atlantic and Pacific oceans when they became stuck in ice. The men all died and the ships vanished.

“I am delighted to announce that this year’s Victoria Strait expedition has solved one of Canada’s greatest mysteries, with the discovery of one of the two ships belonging to the Franklin Expedition, ” prime minister Stephen Harper said in a statement.

“Finding the first vessel will no doubt provide the momentum - or wind in our sails - necessary to locate its sister ship and find out even more about what happened to the Franklin Expedition’s crew.”

The mystery has gripped Canadians for generations, in part because of the crew’s grisly fate. Tales handed down through the aboriginal Inuit people describe cannibalism among the desperate seamen.

Mr Harper, who has visited the Arctic territory of Nunavut every year since taking power in 2006, said the discovery was an historic moment for Canada.

“Franklin’s ships are an important part of Canadian history given that his expeditions, which took place nearly 200 years ago, laid the foundations of Canada’s Arctic sovereignty,” he said.

Global warming is rapidly melting the Arctic ice sheets, opening up the possibility that ships travelling between the Pacific and Atlantic Oceans could use the Northwest Passage as a short cut.

Canada says it has sovereignty over the passage but the United States does not acknowledge this, saying the channel lies in international waters.

This year’s bid to locate the ships included money spent on seabed mapping to make “Canada’s Arctic both safer and more secure,” according to a Parks Canada release at the time of the expedition.

An image released showed a largely intact wooden ship resting upright on the sea bed only 11 metres below the surface. Some of the deck structures were still intact, although the main mast had been sheared off.

Mr Harper said experts did not yet know whether the ship found was the Erebus or the Terror.

Canadian divers and archaeologists had been trying since 2008 to find the ships, which became ice-bound off King William Island in the Victoria Strait in Nunavut.

The search for Franklin started in the late 1840s and over the decades teams have discovered traces of 70 crew members, some of whom started trekking overland in desperation when it became clear the ships would never escape from the ice.

They proved hard to find because they drifted in ice for hundreds of miles and the Inuit gave conflicting accounts of where they sank.