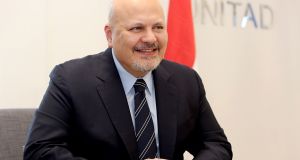 British human rights lawyer Karim Khan was elected to be the new prosecutor of the International Criminal Court, a daunting job which has seen the incumbent end up under US sanctions. Photograph: Sabah Arar/AFP via Getty Images

Member states of the International Criminal Court (ICC) have elected British barrister Karim Khan as the next prosecutor of the war crimes tribunal.

Mr Khan, an assistant UN secretary-general, was widely seen as the favourite to get the job. But neither Mr Khan nor any of the other candidates gained enough support to be appointed by consensus, prompting Friday’s election in the UN general assembly hall.

The ICC prosecutor holds a position that is one of the toughest in international law due to the court’s mandate to prosecute war crimes, crimes against humanity and genocide.

Mr Khan won on the second ballot of the 123 parties to the Rome statute that established the tribunal. He received 72 votes, ahead of Mr Gaynor with 42 votes, Spain’s Carlos Castresana Fernandez with five votes and Francesco Lo Voi of Italy with three votes. One member did not vote.

Mr Khan has been leading an investigative team set up to investigate allegations of genocide, crimes against humanity and war crimes committed by the Islamic State group in Iraq.

He is no stranger to the ICC, having acted as a defence lawyer for Kenyan deputy president William Ruto and persuading judges to throw out prosecution charges against his client.

Mr Gaynor acted as a legal representative for victims in the Ruto case, which focused on post-election violence.

“I would also like to thank all states parties who joined us in supporting judge Fergal Gaynor in his candidacy for this position,” Mr Coveney said.

Mr Gaynor, who was born in Malawi and studied law in Trinity College, Dublin, has been working on international criminal justice since 2001.

He will continue to work as reserve international co-prosecutor in the court on Cambodia and as a member of the roster of international judges of the Kosovo specialist chambers.

Mr Coveney said: “The ICC is central to the international criminal justice and accountability framework. Ireland has consistently highlighted the significance of the prosecutor position for the court, and the need to identify a prosecutor supported by the majority of states parties.

“I am pleased that this was achieved and I hope that all states parties can now unite behind the work of the new prosecutor.”

The Trump administration slapped sanctions on current incumbent Fatou Bensouda and one of her top aides last year for continuing to investigate war crimes allegations against Americans, although the court was often criticised in the past for its focus on African crimes.

Last week, ICC judges angered Israel by saying the court’s jurisdiction extends to territories occupied by Israel in the 1967 Middle East war, potentially clearing the way for the prosecutor to open an investigation into Israeli military actions and the country’s construction of settlements in the occupied West Bank and annexed east Jerusalem.

The selection process and the alleged failure by the ICC’s Assembly of States Parties to conduct stringent background checks on the candidates has drawn criticism from civil society groups that work with the court. Additional reporting - AP