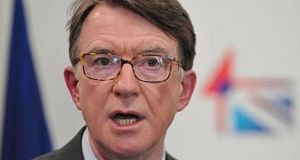 Britain’s former Northern Ireland secretary of state Peter Mandelson has warned Taoiseach Leo Varadkar not to “be taken in, don’t be conned” by Boris Johnson during their Dublin meeting on Monday.

Mr Mandelson, an ex-EU commissioner, said the British prime minister’s “bullying, scorched earth” Brexit strategy has “badly backfired” as mounting numbers of his own Tory party colleagues turn against him.

“[Downing Street] just expects everyone – Tory ministers, Tory MPs, Tory voters – to just step out of the way as they hurtle towards a no-deal exit,” he said. “But what is clear now is that there are enough Tories prepared to stand up against that.”

Mr Mandelson said Mr Johnson was trying to play “an elaborate game of chicken with the European Union. That only works if everyone on your own side thinks the same as you do, that [they] are as determined to hold out as he is,” he told RTÉ Radio’s This Week.

“Many are not only not prepared to play this game, but they want to go in a completely different direction.”

The latest resignation from the British cabinet of secretary of state for work and pensions Amber Rudd – citing no evidence from Mr Johnson that he is trying to get a deal with Brussels – has exposed that the “so-called negotiations” with the EU “are indeed a sham”, said Mr Mandelson.

“They are not real. He’s prepared to have a deal, but he wants a UK deal, a fait accompli deal. And if he has to compromise, he will go for no deal.”

Mr Mandelson said the Taoiseach should “of course” listen to Mr Johnson if he has a “genuine” alternative to the backstop guarantee against a post-Brexit hard border.

“But I don’t believe this is what the British government is seriously canvassing,” he added. “They are looking at ways in which to change the sectoral coverage of the so-called backstop and its duration. But in effect what they are doing is designing a UK-oriented backstop that suits the needs for hard Breixteers in Britain, which would not be a backstop at all. So, by all means listen, and of course engage and of course listen to what the British prime minister has to say, but don’t be taken in; don’t be conned.”

Why would Mandelson back Corbyn?

Many in Britain, in the Conservative party, “and as we now know even Conservative cabinet ministers” don’t believe “that what Boris Johnson is envisaging and the approach he is taking has any credibility”.

Mr Mandelson said he doesn’t “believe for one moment” British government claims that a package of measures could be implemented at present obviating the need for a hard border in a crash-out Brexit.

The former minister in Tony Blair’s government, and co-architect of the New Labour project, also said he would support Labour leader Jeremy Corbyn as prime minister after a general election.

Asked if he would, he replied: “I don’t want the Tories to continue for a day longer than is absolutely necessary. I want them replaced by a Labour government. So the answer to that is yes.”