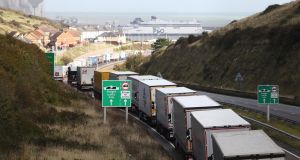 Lorries at Dover due to industrial action in Calais: Until very recently, there appeared to be a naive expectation that Irish lorries would be able to skip Brexit-created queues. Photograph: Gareth Fuller/PA

The failure to develop fast daily direct ferry services to continental Europe has exposed this country to another economic hammer blow in just three months time. The consequences for industry and employment, coming on top of all the other current woes, will be devastating.

Since the Brexit vote over four years ago, the political system has displayed nimble political footwork in positioning this country on the high moral ground in the various tussles between the EU and UK in relation to the Border.

However, nothing like the same energy or commitment seems to have been applied to the practical reality of preparing for the inevitable consequences of Brexit. The most obvious impact is that the UK landbridge across which over 80 per cent of our exports to the continent are transported every day will be disrupted irrevocably.

Until recent weeks there appeared to be a naive expectation that Irish lorries would be able to skip the queues at Dover and other British ports on the basis that the correct documentation would allow them to move from one EU state to another without undue delay. The notion that British lorry drivers would be happy to see their Irish counterparts waved to the top of the queue was never realistic and the potential for confrontation and even violence if the police attempted to facilitate it cannot be underestimated.

This week’s warning by UK Brexit minister Michael Gove that there could be queues of 7,000 lorries at the port of Dover, even if there is a trade deal, should have finally woken people up to the fact that special dispensation for Irish hauliers using the landbridge is simply not feasible. It is certainly possible that, once they get to France, Irish lorries will be facilitated in getting through customs far faster than their British counterparts but getting on the ferries without queuing for days will be the problem.

A few simple figures illustrate the scale of the problem. About 150,000 Irish lorries use the landbridge every year and more than 80 per cent of the one million “roll-on, roll-off” lorries using Irish ports go to the UK. The Irish Maritime Development Office valued the trade crossing the landbridge at €18 billion in exports and €3 billion in imports in 2016.

In the light of this, the failure to plan for fast, daily ferry services to the continent is incomprehensible. Instead the focus has been on negotiating with UK and EU officials to give Irish hauliers special access to the cross-channel ferry services. Reliance is being put on a Common Transit Convention which will allow EU goods to move through the UK without going through full custom and import/export formalities.

The failure to plan for fast, daily ferry services to the continent is incomprehensible

That is all very fine in theory but the convention will not be worth the paper it is written on if not enforced by the British authorities. How they will do that in the context of seven-mile-long queues at Dover is a moot point. In reality, the convention will be unenforceable and Irish lorry drivers will have to take their place in the long queues alongside their British counterparts.

Independent Wexford TD Verona Murphy raised the issue in the Dáil last week, suggesting the UK would renege on its commitments, as it had done on the Irish protocol. “We’re putting ourselves in the hands of the UK where they can pull the rug out from under us and say ‘you’re not going to be able to use the land bridge’.” The reality is that even if they want to enforce the rules, it will be impossible for the British authorities to do so given that they will have to cope with their own angry hauliers.

Murphy told Taoiseach Micheál Martin that direct, daily ferry services to the continent were the only solution and she called for the necessary €100 million – or even €150 million – to be put into developing Rosslare port to provide such services. Martin pointed out that significant investment was being put into Rosslare to develop customs facilities and port infrastructure but it could not be done overnight. Wexford County Council is currently considering a planning application for a €30 million development.

Part of the explanation for the inertia is probably psychological

It is astonishing that the penny is only now beginning to drop with both Government and hauliers that the landbridge will no longer be a feasible option for the bulk of our continental exports after January 1st. Part of the explanation for the inertia is probably psychological. Our long historical trading links with the UK have created a dependency that makes the landbridge appear an easier option than opening far more direct routes to the continent.

In practical terms, such routes will not cost much more and may even cost less once they are up and running. There is a problem of longer times for delivery but they will be nothing to the delays that are now going to be inevitable not just in the first few weeks of January but for the foreseeable future. There is still time to hire the extra ferry capacity to tide the country over the immediate problems that will arise in January. But, in the longer term, we need to prepare to grasp the full implications of Brexit and develop closer trading ties with the continent.