Fisheries will ‘no doubt’ be negatively affected, while hauliers worry about delays 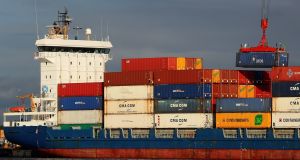 The Cabinet will meet earlier than scheduled, convening on Monday to discuss the Brexit deal struck on Christmas Eve.

It comes as senior political and industry figures warned that key sectors of the economy would face disruption despite the agreement between the United Kingdom and the European Union.

Minister for the Marine Charlie McConalogue said there was “no doubt” that the trade deal would have a negative impact on the fishing industry. Although he welcomed the deal, saying it had avoided the worst effects of no-deal, he said “it will mean reductions in quota levels for some species from April”.

“The Government is fully assessing the outcome of the deal from a fisheries perspective and is determined to ensure the sector is fully supported,” he said. “Work on the full assessment of the outcome will continue over the coming days.”

In the short term, fishermen will be able to continue fishing under existing quota arrangements from January 1st until the end of March.

Government sources said that while Covid-19 and the State’s vaccination programme would probably be discussed on Monday, the main item on the agenda would be the terms of the Brexit deal.

Mr Flynn said that although the early days of January were usually quiet, volumes would increase into January and February. “As they increase, requirements to be compliant are going to cause delays, which we are of course concerned with.”

It comes as Boris Johnson has expressed confidence that even the most hardline Brexiteers among Conservative MPs would vote for the deal when it comes before the House of Commons on Wednesday. But his government warned businesses and citizens that they must prepare for new bureaucratic hurdles from January 1st if they are trading with or travelling to the EU.

Mr Johnson said he was not worried about the verdict of a “star chamber” of lawyers appointed by the European Research Group (ERG) of Eurosceptic Conservatives to study the text of the agreement.