Refusal to commit to conditions of fair competition along with fisheries issue is problem, says EU 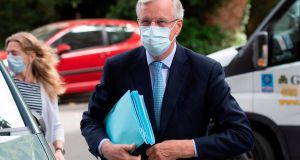 The European Union’s chief Brexit negotiator said on Thursday that the United Kingdom had shown no willingness to break deadlock on the level playing field and fisheries issues, making sealing a new trade agreement unlikely.

“By its current refusal to commit to conditions of open and fair competition and to a balanced agreement on fisheries, the UK makes a trade agreement - at this point - unlikely,” Michel Barnier said.

He added that as long as London’s position on these two core matters does not shift, there was a risk of failure of negotiations and a damaging no-deal split between Britain and the 27-nation bloc at the end of this year.

Speaking after this week’s round of negotiations in London, Mr Barnier said there had been no progress at all on the question of ensuring fairness on state aid.

“The time for answers is quickly running out,” he told a news conference in London, referring to the five months left before the end of Britain’s transition period since it formally left the EU at the end of January.

“If we do not reach an agreement on our future partnership, there will be more friction.”

Mr Barnier noted some progress on lateral issues this week but said the EU would not seal an agreement that would damage its fishing industry and noted that the sides were still “far away” from each other with only a few weeks left to go.

“We will not accept to foot the bill for the UK’s political choices,” he said.

Speaking separately in London on Thursday, the UK’s Brexit negotiator David Frost said he thought sealing a deal was still possible in September.–Reuters