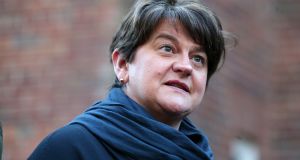 Northern Ireland First Minister Arlene Foster said on Friday night that she decided to appear on RTÉ’s Late Late Show just as the UK officially departed the European Union to demonstrate that the North and Republic were still neighbours.

The DUP leader appeared on the show for the first time and was told by host Ryan Tubridy when the clock struck 11pm, marking the precise moment of the UK’s departure following years of often acrimonious politics.

“We are leaving the European Union tonight, the United Kingdom leaves, but that doesn’t mean that we are not still neighbours and I wanted to send out a message that we are and will continue to be neighbours,” she said.

“I felt the most easy way to do that was to come here and to be on your show – to say that whilst we are leaving the institutions of the European Union we are leaving Europe and we are certainly not leaving the island of Ireland and we will continue to have those neighbourly relations.”

Ms Foster said that while she was pleased by Brexit, she was also concerned Northern Ireland was not leaving on the same terms as the rest of the UK and there were still “issues to be dealt with”.

Twice she sidestepped the question of whether she believed prime minister Boris Johnson anymore and said, when asked, that she would not use the term “shafted” regarding how he had finalised the withdrawal terms.

However, she disagreed there was any “weakening of the union” as Northern Ireland remains in the UK customs code but that work on various issues was now required over the next 11 months.

“Of course it rankles . . . what we didn’t want to see was borders developed North/South but we certainly didn’t want them east/west which is actually internal, inside our own nation, which is wrong as well,” she said.

Whatever is to come in the aftermath of the UK’s departure, the DUP leader remained steadfastly confident there would be no united Ireland.

“I don’t think it will become a reality,” she said. “There are many, many reasons why we will stay in the United Kingdom – economic, social, political, cultural, all of those reasons will mean that we will stay there”.

Asked to describe her relationship with the late Martin McGuinness, she said she had gotten on well with him but had paid a personal price for attending his funeral in 2017.

“I lost friends over going to the funeral but I still believe it was the right thing to do,” she said. “They told me [they did not approve] . . . it was difficult because these were people who I have known a long time, but they take a different view in relation to this.”