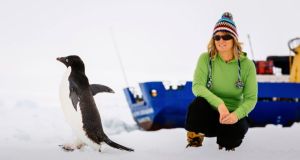 Barbara Tucker, a passenger on the trapped ship Akademik Shokalskiy, looks at an Adelie penguin walking by on the ice off East Antarctica yesterday. Photograph: Reuters/Andrew Peacock

Ice that has trapped a Russian ship with 74 people on board in Antarctica appeared to be cracking up yesterday, raising hopes for a rescue as a powerful Australian icebreaker approached the stranded vessel.

The ice-bound ship, the Akademik Shokalskiy, left New Zealand on November 28th on a privately funded expedition to commemorate the 100th anniversary of an Antarctic journey led by famed Australian explorer Douglas Mawson.

It has been stuck in the ice since December 24th. Its passengers include scientists and tourists, many of them Australian, and a Russian crew.

The Australian icebreaker the Aurora Australis was expected to reach the stricken ship at about midnight last night.

A Chinese icebreaker could not break through the thick ice earlier but the weather yesterday boded well for a rescue.

“The ice conditions seem to have improved and there appears to be some softening and some cracks appearing,” said Lisa Martin of the Australian Maritime Safety Authority, which is co-ordinating the rescue. Those on board were in good condition and have never been in any imminent danger.

The Aurora is the third icebreaker seconded by the Australian maritime rescue agency to try to reach the hemmed in ship.

The Chinese icebreaker, the Snow Dragon, is on standby at the edge of the ice.

A French icebreaker had also tried to help. – (Reuters)