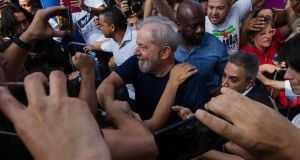 Former Brazilian president Luiz Inácio Lula da Silva , who was jailed in April on a corruption conviction, was sentenced on Wednesday to nearly 13 more years in a new graft case, making it increasingly unlikely that a man once considered the lion of Latin America’s left would ever recover his political clout.

Lula, a two-time president who left office in 2011 with a record-high approval rating, was leading in the polls last year to win another term even after he went to jail. But less than a month before the vote, electoral authorities barred him from running because of the corruption conviction.

In his absence, Jair Bolsonaro, a far-right candidate who vowed to eradicate a culture of corruption that he blamed on Lula and his Workers’ Party, surged ahead. He was sworn in January 1st.

Lula (73) denies any wrongdoing, and his supporters have accused the courts and the country’s elites of political persecution to keep him from office. While Lula had support among Brazil’s poor, he also had a high disapproval rating thanks to the Lava Jato, or Car Wash, investigation, which documented the political corruption that flourished during the 13 years his party was in power.

The charges against Lula so far have been relatively small chapters in the annals of Lava Jato. He was found guilty in 2017 of accepting a seaside apartment in return for contracts awarded to construction company OAS and was eventually sentenced to 12 years and one month in prison.

In the new ruling on Wednesday, Judge Gabriela Hardt found Lula guilty of accepting bribes from construction companies in the form of a $235,000 renovation of a country house and sentenced him to 12 years and 11 months in prison. Lula said his name was not on the title of the home, but prosecutors presented evidence that he and his family had occupied it.

She said the former president “was aware that there were systematic bribes paid to the party he belonged to; he was very aware that part of those sums were used for his personal benefit”.

Lula, who has appealed his first conviction to Brazil’s top courts, is expected to appeal the latest decision as well. He is a defendant in at least six other cases. “The persecution of Lula doesn’t stop,” the president of the Workers’ Party, Gleisi Hoffmann, wrote on social media. “In the memory of the people and history, Lula will always be greater than his executioners.” – New York Times