Brazil in shock at Lula’s detention in corruption inquiry 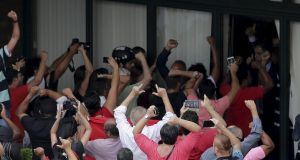 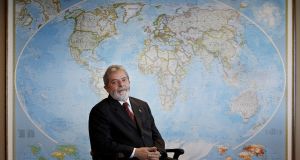 Then president Luiz Inacio Lula da Silva of Brazil in his office in the Palacio do Planalto, in Brasilia in 2007. Photograph: Lalo de Almeida/The New York Times

Though the net has been closing in for months, there was still a palpable sense of shock when Brazil woke up on Friday morning to the news that former president Luiz Inacio Lula da Silva had been lifted by police at first light for questioning about his involvement in the long-running Petrobras scandal.

It has been a dramatic fall from grace for the former president, who left office at the start of 2011 with stratospheric poll ratings after eight successful years in power.

Brazil’s first ever left-wing leader, the former machine operator was a giant who bestrode the country’s political stage who through the sheer force of his own personality transformed the little-known and less-loved Workers’ Party apparatchik Dilma Rousseff into his successor.

It was generally assumed that Lula would be her presidency’s guiding force before formally easing himself back into his old job in 2018. But such plans now lie in ruins and instead he faces a battle to stay out of jail while his party is in an existential battle for its political survival.

Under way for two years, the Petrobras inquiry - nicknamed Car Wash - is turning into Brazil’s own version of mani pulite, the Italian “clean hands” investigation of the 1990s which led to the demise of that country’s post-war political order.

Though he has not been charged at this stage, Lula’s stature and his personal biography as Brazil’s original working class hero mean he is the biggest fish caught so far in the net of federal prosecutors. But it is a whole political class and decades-long way of conducting politics that is now unravelling, not just the authority of the Workers Party.

The evidence tumbling out of the Car Wash investigation already seriously compromises the political futures of Rousseff, her estranged vice-president Michel Temer and the presidents of the senate and lower house of congress - that is Brazil’s current leader and the next three officeholders in the line of succession. She is the only Workers’ Party member among them.

And while the country’s opposition is now baying for blood, sensing a chance to end 13 years of Workers’ Party domination, it is also deeply compromised by corruption.

Aécio Neves, the candidate whom Rousseff defeated in 2014, has also been named in the Car Wash investigation. A return to power for the opposition might only serve to shine a harsher prosecutorial light on the activities of those currently thundering against Workers’ Party malfeasance.

So, however happy many Brazilians are to see Lula and other politicians face justice, the fact remains that while one political order is crumbling, little is being done to build a more rational, ethical one in its place, leading to rising uncertainty.

As several Brazilian commentators have pointed out in Italy, mani pulite ended up delivering the country into the hands of Silvio Berlusconi.