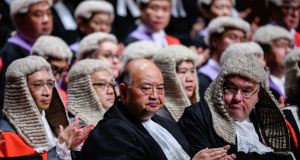 Beijing is expected to target Hong Kong’s independent judiciary as it tightens control over the territory’s institutions, according to Philip Dykes, head of the city’s bar association.

As part of a widening crackdown on dissent following the passage of a security law in June, the authorities have already disqualified opposition politicians, sacked teachers and arrested independent journalists. Now they are expected to take action against the city’s judges, senior lawyers said.

So urgent has the matter become that senior UK ministers have warned that British judges sitting on Hong Kong’s highest court should not lend “a veneer of legitimacy” to the territory’s legal system if it was compromised by the security law.

“The attention of the mainland . . . has [now] switched to the judiciary,” Dykes said in an interview, adding Beijing could push to “instil patriotic instincts” in judges.

Hong Kong’s common law legal system underpins the territory’s role as an international financial centre, analysts said, with foreign judges including from the UK serving on the city’s highest judicial body, the Court of Final Appeal.

The Basic Law, the city’s mini-constitution enacted on its handover from the UK to China in 1997, guarantees that Hong Kong’s courts will “exercise judicial power independently, free from any interference”.

Yet Beijing’s national security law, which it imposed on Hong Kong in response to violent anti-government protests last year, has breached the firewall separating the city’s legal system from that of the mainland, lawyers said.

The law allows trials for some offences to be conducted in mainland China and for Carrie Lam, the Hong Kong chief executive, to directly appoint a pool of judges for national security-related cases in a stark break with the spirit of the Basic Law.

Concerns that Beijing might go even further are growing after Zhang Xiaoming, deputy director of the Hong Kong and Macau Affairs Office, suggested this month that Beijing planned to “reform” the judiciary.

Hong Kong’s independent legal system distinguishes the territory from the rest of China, where the ruling Communist party plays a direct role in the country’s civil law system.

For international companies and financial institutions operating in the territory, the city’s legal system serves as a guarantee that they can enforce contracts against Chinese state-owned enterprises and companies linked to mainland officials.

Unlike in mainland China, the Basic Law provides for the separation of powers between the legislature, the executive and the judiciary, according to Geoffrey Ma, the chief justice of the Hong Kong Court of Final Appeal. Under the Basic Law, the chief executive appoints judges on the recommendation of an independent committee.

They may not be fired except for “misbehaviour” or an inability to do their job and then only on the recommendation of a tribunal appointed by the chief justice and comprising three judges.

“The judicial system is the one element of Hong Kong’s government system which remains completely independent from China’s control,” said Danny Gittings, the author of Introduction to the Hong Kong Basic Law.

In one recent example of judicial independence, the high court ruled that the police violated the city’s Bill of Rights last year by not displaying ID numbers during the anti-government protests.

Why Beijing is against the separation of powers

Lam offered the first hint of trouble for Hong Kong’s judiciary in September when she insisted that there was no separation of powers in the city.

Since the law was introduced, at least two magistrates have been reassigned to different roles after complaints from pro-Beijing politicians or newspapers about their rulings in cases relating to the anti-government protests in 2019. One of the magistrates criticised police testimony when acquitting a district councillor of assaulting an officer, according to local media reports. The judiciary said the judges were reassigned for normal operational purposes.

Last week, government prosecutors argued in court that Lam’s authority to assign judges under the national security law should be extended to a case that was not being tried under the legislation. They claimed the case was related to national security, which meant the special powers could be used. Hong Kong opposition activist Tam Tak-chi, the defendant, is accused of sedition for uttering protest slogans.

Johannes Chan, a Hong Kong University law professor, said such a move would represent a significant expansion of the power of the executive over the judiciary, and would open the door for the government to partake in “forum shopping” to find more favourable judges.

Pro-Beijing politicians, who have complained about “light” sentences handed to protesters, are calling for a “sentencing council” to increase the supervision of judges’ decisions. In the UK a sentencing council is made up of both judges and police as well as social workers and academics, and provides guidelines for the judiciary.

Dykes and Eric Cheung, a member of the council of the Law Society of Hong Kong, which represents solicitors in the city, said they also feared the Chinese government would change the Basic Law to allow the disqualification of judges.

“I’d hate to think there would be a temptation to bypass provisions in the Basic Law concerning judges’ security of tenure,” Dykes said.

There is a precedent. This month, Beijing intervened to allow Lam to disqualify opposition politicians in the legislative council, prompting the rest of the pro-democracy camp in the de facto parliament to resign and in effect wipe out the opposition.

“What it boils down to is they [Beijing] do not accept an independent judiciary,” Chan said. “Things are not looking good.” – Copyright The Financial Times Limited 2020

4 Fauci reveals what it was really like working for Trump