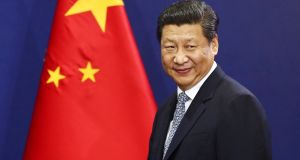 Without once changing his direction, flipping his political message or sending a single tweet, China’s president Xi Jinping has entrenched his position as a powerful leader at home and an influential force overseas.

At the 19th Communist Party congress in October, in the Great Hall of the People in Beijing, Xi made a 3½-hour speech in which he outlined the blueprint for consolidating the party’s grip on power.

By the congress’s end, he had been elevated to “core” leader of the party, a status that placed him on a par with former strongmen leaders Mao Zedong and Deng Xiaoping. He had chosen the other members of the elite standing committee of the politburo and enshrined himself in the party constitution.

Despite the strong position he holds heading into 2018, analysts and scholars speaking to The Irish Times say Xi faces challenges at home and abroad.

He has to make good on promises to improve the environment and to implement the rule of law, while also providing better access to healthcare and education, reforming the unpopular “hukou” residence permit system and making economic growth meaningful to everyone, not just an urban elite.

“Yes, Xi has consolidated his power and position, and is genuinely now very powerful. But like the regime itself, his power is brittle – hard and strong as far as it can be seen, but not necessarily without its Achilles’ heel,” says Steve Tsang, director of the Soas China Institute in London.

Recent months have seen widespread clearing of migrant workers, the urban “underclass”, in Beijing. While this operation has proven unpopular among ordinary Beijingers, including the middle classes on whose support he relies, it is expected to continue next year.

“The clearing of the urban underclass from Beijing of late seems to chime with Xi’s new priorities,” says Tsang.

The National People’s Congress in March will be watched for signs of Xi anointing a successor. Although the duo haven’t yet made it to the standing committee, speculation continues that Guangdong party chief Hu Chunhua may be appointed vice-president and Chongqing party boss Chen Min’er vice-premier. This is of particular interest to Ireland as Hu visited this year.

External forces have done much to burnish Xi’s credentials as a stable and responsible leader. He moved quickly to establish China as a champion of globalisation in the gap left by US president Donald Trump’s isolationist moves.

“Xi has remarkably become a source of stability, responsibility and predictability. But China’s challenges remain as fearsome as they did in the era of Hu Jintao,” says Kerry Brown, professor of Chinese studies at King’s College, London.

“There is the need for fundamental reforms in the administration, finance sector, in central and provincial relations, and in the way that Chinese people participate in decision-making,” says Brown.

David Kelly, research director at the China Policy analysis firm in Beijing, believes Xi has established himself at the top of the hierarchy, and that he is unchallengeable for now.

“He has lots of popular support through anti-corruption. The strategy has been to compensate for local setbacks with international successes, which we label ‘the China Solution’,” said Kelly.

“Xi doesn’t need any financial setbacks, or a shortage of labour leading to inflation,” said Kelly. “He’s not as secure as he’d like to be.”

With projects such as the Belt and Road Initiative (BRI), a massive infrastructure programme aimed at expanding China’s reach, Xi has taken a risk because of high levels of debt in the public coffers and because some of the BRI partners are less reliable than desired.

“The risk-taking is not paying off uniformly. All the international successes, such as G20 and the BRI, are being aggressively tied to one figure. You concentrate the gains, but you also concentrate the risks,” said Kelly.

One of the main external events is the Korean nuclear crisis, simmering just across the border.

North Korea is an ally, although relations are strained over Kim Jong-un’s nuclear programme, and China has come under pressure to do more to help secure a solution.

Trump in particular has been on Xi’s back, and following the successful testing of a missile that can reach the US mainland, pressure is unlikely to diminish.

Viewed more broadly, however, Xi has no real interest in rushing to become the world’s biggest superpower and Beijing is unlikely to take a more proactive role in North Korea. It sees the problem chiefly as one for the US. Unless Trump issues an ultimatum, Beijing will keep its distance.

James McGregor, president of the greater China region for the consulting firm Apco, believes Xi is standing tall in a world looking for leadership and predictability.

“But his stature could diminish if Chinese policies continue to be very different than the official rhetoric. Now that he seems to be in charge of everything he also could face blame for anything that goes wrong. Maintaining power in China is a difficult exercise,” said McGregor.