Who tops the class – China tigers or western softies? 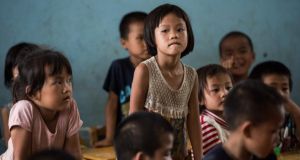 No talking. No questions. Study hard. Obey teacher. Secondary school kicks off with morning exercises at 7am and ends with a trudge homewards at 7pm for more homework. Hot jiaozi dumplings sustain you during the two mealtimes, but get caught texting on your phone at your own peril.

This is a familiar scenario for a Chinese student, but one that would strike horror into the heart of most Irish students and their parents.

In the series, five top Chinese teachers spent a month with students at the Bohunt School in Liphook, Hampshire.

Li Aiyun, who teaches English and Chinese at a school in Nanjing, described the classroom in Britain as “chaotic”.

“When I assigned them to do some work in the classroom, some of the students were eating and some were even putting on their makeup when I walked in,” she said in an article carried on WeChat social media.

The show quickly went viral in China, where many Chinese web users said they oppose the rigid methods, familiar to readers of Amy Chua’s 2011 book, Battle Hymn of the Tiger Mother. The reaction in the West is different, where many parents, exasperated by failure to learn the three Rs, find the Chinese approach a useful way of improving grades.

“Seek the truth, scale the heights, be erudite, be modest.” This Confucian message is hung on the wall in English, beside its equivalent in Chinese and the red flag of China in the middle at Bohunt School.

Beneath it, children chatted and laughed, asked cheeky questions of their teacher, or simply ignored them, and did lively performances of Mark Ronson songs while the visiting Chinese teachers struggled to control the class.

Efforts to tame unruly students by separating them from their classmates or standing against a wall are met with indifference. In China, this would be seen as a singling out that would cause major embarrassment and shame.

I watched the first episode with my son Fred, who went through the Chinese school system for six years. He found the teachers too nice and was stunned by the behaviour of some of the British students.

“There is no way my teachers would have tolerated talking and answering back like that,” he said. “It’s unthinkable.”

In one scene, an overweight boy fails the requirement that every student be able to run 1km, and he feels humiliated. However, he excels at solving the ring puzzles that are brought from China by maths teacher Zou Hailian.

But even there the divide is deep. Zou, who goes by the English name Simon, teaches at a prestigious high school in Hangzhou in eastern China – in English.

“I introduced the Chinese ring puzzle to the students,” Simon wrote online. “I brought 70 puzzle pieces from China. I gave every student one puzzle to solve as an exercise, and I told them to keep it as a small gift from me.

“Unfortunately, after the evening study session, some students left the ring puzzles on the desks. Some even left them on the floor. The empty boxes were all over the floor. When I was doing the routine classroom inspection that evening, I felt very embarrassed.”

Head teacher Neil Strowger told the BBC website that Chinese teaching methods were on a collision course with teenage British culture and values, a sentiment that will resonate in Ireland.

“Our pupils are used to being able to ask questions of the teacher – they expect their views to be considered with respect,” he said.

“It is, however, abundantly clear to me that Chinese parents, culture and values are the real reasons that Shanghai Province tops the oft-cited Pisa tables rather than superior teaching practice,” Strowger said.

In one telling moment, teacher Zhao Wei points out how in China, education is often linked to survival. Doing well at school means you can better look after your family.

No work, no money

Were the government to cut benefits and force people to work, Wei said, they might see things differently and realise the importance of a better education.

At the end of the four-week period, students from the Chinese class and those from the equivalent class at the school will be tested to see who performs better.

It will be fascinating to see which system prevails or if the merits of both approaches win the day.