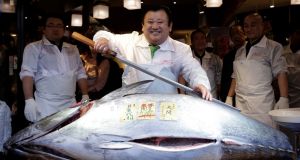 Kiyoshi Kimura, president of sushi restaurant chain Kiyomura Co, with the 200kg bluefin which sold for ¥14 million: The popularity of Japanese food means bluefin has become more sought after by diners in other countries, notably China. Photograph: Kiyoshi Ota/EPA

A sushi restaurant in Japan has paid €110,000 for a bluefin tuna at the first auction of the year at Tokyo’s Tsukiji market, despite repeated warnings that the prized fish is heading towards extinction.

Kiyoshi Kimura, president of the firm that runs the Sushi Zanmai restaurant chain, said he was “glad” to have outbid rivals in the last New Year auction to be held at the 80-year-old market before it completes a troubled move to new premises later this year.

Kimura paid ¥14 million for the 200kg tuna, which was caught on the northernmost tip of Japan’s main island, Honshu.

The price was three times higher than last year but much lower than the record ¥155.4 million yen he paid in 2013 after entering a fierce bidding war with a Hong Kong restaurateur over a 222kg fish.

Tsukiji’s first auction of the year is market by inflated bids, as buyers compete for the prestige of securing the first big tuna of the year.

But marine conservation groups have warned that overfishing is threatening the survival of the Pacific bluefin, a delicacy in Japan and other parts of Asia.

Urgent action is needed, they say, to rescue the Pacific bluefin population, which in 2012 was estimated to have plummeted by 96 per cent from unfished levels during nearly a century of overfishing.

Stocks will continue to decline “even if governments ensure existing management measures are fully implemented”, Amanda Nickson, director of global tuna conservation at the Pew Charitable Trusts, said in a statement.

About 80 per cent of the global bluefin catch is consumed in Japan, where it is commonly served raw as sashimi and sushi. A piece of otoro – a fatty cut from the fish’s underbelly – can cost several thousand yen at high-end restaurants in Tokyo.

The popularity of Japanese food means bluefin has become more sought after by diners in other countries, notably China.

Last September, Pew warned that the Pacific bluefin was “one step closer to collapse” after tuna-fishing nations, including Japan, failed to agree to new conservation measures.

“Given the already dire state of the population – decimated to just 4 per cent of unfished levels – it is of particular concern that the auction price is rising again,” said Nickson.

“The international community must let the Japanese government know that additional action is needed to save this species.”

Tsukiji, the biggest fish market in the world, whose predawn auctions are a popular tourist attraction, outgrew its current premises years ago.

Its owner, the Tokyo metropolitan government, had intended to move it two decades ago to a new location a few miles to the south in Tokyo Bay.

The move has been delayed twice, though, after toxins were discovered in soil at the new location, the former site of a coal gasification plant.

Officials say the move will go ahead in November after contaminated topsoil at the site was removed and replaced with clean soil. Workers have also pumped out polluted groundwater and injected fresh water.