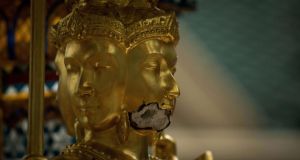 Thai officials say this week’s Bangkok shrine bombing was likely planned by at least 10 people, including some foreigners, but is not believed to have been carried out by an international terror group.

No one has yet claimed responsibility for the attack on the Erawan shrine at Bangkok’s Ratchaprasong intersection, in which 20 were killed, including 14 foreign tourists from China, Hong Kong, Britain, Indonesia, Malaysia and Singapore.

Scores were injured in the explosion, with many losing limbs.

Colonel Winthai Suvaree, a spokesman for the ruling military junta, said it was “unlikely” the attack was the work of an international network.

Thai police chief Somyot Pumpanmuang said the investigation showed the attack was planned at least a month in advance by a “big network”.

“This includes those who looked out on the streets, prepared the bomb and those at the site and . . . those who knew the escape route. I believe there must have been at least 10 people involved,” said Mr Somyot.

Police released an identikit picture of the chief suspect, which appeared to show a Caucasian man, but Mr Somyot said nothing was clear yet.

“The criminal could be someone from inside the country but was disguised to make himself appear a foreigner,” he said.

Two men previously identified as suspects in the bombing because of their proximity to the chief suspect have been cleared of involvement.

By ruling out foreign militant involvement, police appeared to dismiss speculation that it might have been Uighur separatists from western China, angry at the forced repatriation of more than 100 of their number from Thailand.

Speculation is now rife that either Muslim separatists waging a low-intensity insurgency in southern Thailand, or domestic political activists, were behind the attack.

Police said they had interviewed a 47-year-old tuk-tuk motorcycle taxi driver who picked up the prime suspect.

He drove the man to the Lumpini Park area of the city and said he was a foreigner, speaking a language he did not know but that was not English, during a phone conversation.

The blast came as Thailand continues to deal with more than a decade of political uncertainty.

The ruling military junta, which took power after a coup last year, plans to introduce a draft constitution next month which critics say limits democratic checks and balances in favour of more control by the army and other factions. The government has promised to restore democracy next year.

Prime minister Prayuth Chan-ocha said the attack signalled a threat to the region. “This event has never happened in Thailand, it is dangerous for ASEAN,” he said, referring to the Association of South East Asian Nations.