South Korea resumes propaganda broadcasts against Pyongyang across the border using loudspeakers, a step that has angered North Korea in the past. Video: Reuters 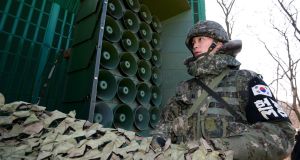 South Korea broadcasted a high-decibel propaganda barrage across its border with North Korea on Friday in retaliation for its nuclear test, while the United States called on China to end “business as usual” with its ally.

The broadcasts, in rolling bursts from walls of loudspeakers at 11 locations along the heavily militarised border, blare rhetoric critical of the North Koran regime as well as “K-pop” music, ratcheting up tension between the rival Koreas.

South Korea, which has grown increasingly close to China in recent years, also said its foreign minister would speak with his Chinese counterpart later on Friday.

Wednesday’s nuclear test angered both the United States and China, which was not given prior notice, although the US government and weapons experts doubt Pyongyang’s claim that the device it set off was a hydrogen bomb.

US secretary of state John Kerry said on Thursday he had made clear in a phone call with Chinese Foreign Minister Wang Yi that China’s approach to North Korea had not succeeded.

“China had a particular approach that it wanted to make, that we agreed and respected to give them space to implement that,” Kerry told reporters.

“Today, in my conversation with the Chinese, I made it very clear that has not worked and we cannot continue business as usual.”

China is North Korea’s main economic and diplomatic backer, although relations between the two Cold War allies have cooled in recent years.

China said after the call with Kerry that it was willing to communicate with all parties, including the United States.

“Wang Yi stressed that China has staunchly dedicated itself to the goal of the peninsula’s denuclearisation and to maintaining peace and stability on the peninsula,” the Chinese Foreign Ministry said in a statement.

South Korea’s foreign ministry had asked for a phone call with Wang right after North Korea announced on Wednesday it had tested a hydrogen bomb, the South’s Yonhap News Agency said.

However, the call had been delayed due to China’s “internal scheduling”, it said, citing an unidentified official.

The South Korean broadcasts are considered an insult by the isolated North which has in the past threatened military strikes to stop them.

The last time South Korea deployed the loudspeakers, in retaliation for a landmine blast in August that wounded two South Korean soldiers, it led to an armed standoff and exchange of artillery fire.

“We urge South Korea to exercise restraint,” British foreign secretary Philip Hammond said during a visit to Japan, after the South resumed the broadcasts.

“It is simply rising to the bait.”

The sound from the speakers can carry for 10 km into North Korea during the day and more than twice that at night, Yonhap reported.

A male announcer could be heard from South Korea telling North Koreans that Kim Jong Un, the leader of their impoverished country, and his wife wear clothes costing thousands of dollars. Another message said Kim’s policy to boost both the economy and its nuclear programme was unrealistic.

North Korea boosted troop deployments in front-line units on Friday, and South Korea raised its military readiness to the highest level at locations near the loudspeakers.

The South vowed to retaliate against any attack on the equipment, raised its cyber security alert and cancelled tours of the Demilitarised Zone on the border.

The majority of North Korea’s business is done with China, which bought 90 per cent of its exports in 2013, according to data from South Korea’s International Trade Association.

Kerry said he and Wang agreed to work closely to determine what measures could be taken given increasing concern about the nuclear test. He said America has a “firm and continued commitment to regional security and global nonproliferation”.

The Global Times, an influential Chinese tabloid, said it was unfair to expect China alone to bring about change in Pyongyang.

“There is no hope to put an end to the North Korean nuclear conundrum if the US, South Korea and Japan do not change their policies toward Pyongyang. Solely depending on Beijing’s pressure to force the North to give up its nuclear plan is an illusion,” it said in an editorial.

“The China-North Korea relationship should not be dragged into antagonism. Beijing has participated in previous sanctions on the North. Whether China will take tougher measures hinges on the decision of the UN Security Council, ” it said.

US Republicans and Democrats in the House of Representatives could join forces in a rare display of unity to tighten sanctions on North Korea.

Nancy Pelosi, the House Democratic leader, told reporters that Democrats would support a North Korea bill likely to be brought for a vote by Republicans next week. A congressional source said it was expected as soon as Monday.

The House measure would target banks facilitating North Korea’s nuclear programme and authorise freezing of US assets of those directly linked to illicit North Korean activities. It would also penalise those involved in business providing North Korea with hard currency.

It was unclear how more sanctions would deter North Korea, which has conducted four nuclear tests since 2006.

The United States and South Korea are limited in their military response. Washington sent a pair of nuclear-capable B-2 stealth bombers over South Korea in a show of force after North Korea last tested a nuclear device in 2013.

North Korea responded then by threatening a nuclear strike on the United States.

A South Korean military official told Reuters that Seoul and Washington had discussed the deployment of US strategic weapons on the Korean peninsula, but declined to give details.

Media said the assets could include B-2 and B-52 bombers, and a nuclear-powered submarine.