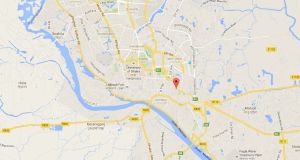 Wari in the area of Old Dhaka, Bangladesh, where the killing took place. Photograph: Google maps

Attackers in Bangladesh wielding machetes killed a liberal blogger, police said on Thursday, the latest in series of murders of secular activists by suspected Islamist militants.

Postgraduate law student Nazimuddin Samad (28) was attacked as he was returning from a class at his university in the capital, Dhaka, late on Wednesday, police said.

Witnesses said a group of cleanshaven men surrounded him and slashed his head, then shot him when he fell to the ground, said Syed Nurul Islam, the deputy commissioner of police for Wari, the area of Old Dhaka where the killing took place. He said the attack lasted less than a minute.

The victim’s Facebook page identifies him as a member of the Shahbag movement, which seeks to punish Bangladeshis who fought for Pakistan during the bloody 1971 war for independence.

In recent posts, he expressed support for a petition to remove Islam as Bangladesh’s state religion and urged the government to take a tougher line with Islamist groups.

In one post, he used a proverb to criticize the government’s approach to rising militancy, likening it to raising a baby snake by feeding it milk and bananas.

A banned Islamist militant group, Ansarullah Bangla Team, claimed responsibility for some of the attacks.

Bangladesh has seen a wave of militant violence over the past year or so, including a series of bomb attacks on mosques and Hindu temples.

Some recent attacks have been claimed by Islamic State, including the killing of Hindu priest, a Japanese citizen, an Italian aid worker and a policeman.

The government denies that Islamic State has a presence in the Muslim-majority country of 160 million people.