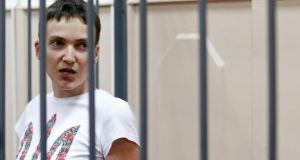 Nobody in the court seriously believed that the Russian judge was going to grant bail to the Ukrainian pilot whose controversial pre-trial detention on charges of war crimes came up for renewal this week.

Yet the ruling at Moscow’s Basmanny district court on Tuesday extending the detention of Nadezhda Savchenko until mid-May cast an ominous shadow over the prospects for the international talks in Minsk aimed at reviving the stalled peace process in eastern Ukraine.

“If Putin wanted to show he was ready to compromise with Merkel [the German Chancellor] he could release Savchenko,” said Andrei Pavlovsky, a deputy in the Verkhovna Rada, or Ukrainian parliament, who had travelled to Moscow to attend the court hearing.

Pale and emaciated from a prolonged hunger strike, Savchenko met the ruling extending her detention with defiance shouting, “Glory to Ukraine” and “Ukraine will prevail” as police led her in handcuffs from the court room.

Russia is holding 30 Ukrainian nationals in connection with the conflict in Donbas and Luhansk that has claimed more than 5,000 lives and opened a deep rift in relations with the West. But it is the 33-year-old Savchenko who has captured international attention as a symbol of Ukraine’s struggle with Russia.

The US and the European Union have demanded the release of Savchenko in accordance with commitments Russia made in the Minsk ceasefire agreement last September. US officials have warned that Russia will not see the end of western economic sanctions until she is freed.

The court’s ruling was “entirely predictable”, he said, but Russia had not yet taken a “political decision on what to do with Savchenko”.

Even before her detention in Russia, Savchenko, the first woman to train as a military pilot in Ukraine and a veteran of the Ukrainian peacekeeping mission in Iraq, was something of a celebrity in her country.

Extraordinarily tough with a “character like concrete”, she defied all female stereotypes, said Feigin. “Savchenko is built of convictions,” he said.

After violence erupted in eastern Ukraine last year, Savchenko took time out from her job in the military and signed up in the Aidar volunteer battalion fighting pro-Russian separatist forces in Luhansk and Donetsk.

Russian state media has described Savchenko as a “killing machine in a skirt” and depicted Aidar as a grouping of violent, far-right Ukrainian extremists.

A report by Amnesty International last year documented widespread abuses by Aidar, including abductions, unlawful detentions, theft and extortions that it said amounted to war crimes.

Russia’s case against Savchenko rests on accusations that she co-ordinated the mortar fire that killed two Russian journalists at a checkpoint in Luhansk on June 17th.

Lawyer s for the defence say the charges are trumped up and that Russian prosecutors have ignored mobile telephone data proving Savchenko was nowhere near the scene of the attack.

What happened next is unclear. Savchenko says she was kidnapped by separatist rebels in Donetsk and handed over to the Russian authorities in violation of international law. Russian prosecutors say she crossed the border illegally.

Harsh treatment in the hands of Russian law enforcement officers – including a one-month spell in a psychiatric hospital in Moscow – has transformed Savchenko into a national hero in Ukraine.

After being elected in absentia to the Verkhovna Rada last October, she was nominated as one of her country’s representatives at the Parliamentary Assembly of the Council of Europe, a Strasbourg-based organisation dedicated to upholding human rights, democracy and rule of law.

“I have been on hunger strike for 60 days and will continue until the time I am able to return to Ukraine or until I die in Russia,” she said.

Supporters of Savchenko, who is being fed a glucose solution intravenously in prison hospital, have warned that she cannot survive much longer without solid nourishment.

However, Nikolai Patrushev, head of the Russian security council, took a hard line after the court hearing, criticising the US for supporting war criminals in eastern Ukraine.

“It would be interesting to see how Washington reacted if called upon to release the perpetrators of a missile attack on American citizens,” he told Rossiskaya Gazeta, the official Russian government newspaper.