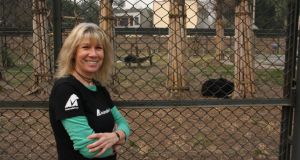 Hong Kong-based animal welfare group Animals Asia is planning its largest rescue so far when it saves 130 bears from a bile extraction farm in China, a milestone in its efforts to stop a gruesome business that has generated outrage for its cruelty.

The bear’s gall bladder is “milked” painfully every day for bile through specially installed catheters. The bile is used in 123 Chinese medicines, many intended for liver disorders. The process causes long-term physical and psychological suffering.

Animals Asia said it reached a deal with state- owned Flower World to take over its bear bile farm in Nanning, in the southern province of Guangxi and convert it into a sanctuary for the moon bears, known for a white crescent marking on their chests.

“China has long been outraged by this cruel practice and our statistics show 87 per cent of Chinese are against bear bile farming,” she said.

“This negotiation is a result of years of growing awareness and increased opposition, with the bear farmer showing the moral integrity to do the right thing.”

From May 5th, Animals Asia will take 28 of the sickest bears 1,200km in a multi- vehicle convoy back to its sanctuary in Chengdu for urgent veterinary attention. Then the group will also take over the care of the bears on the Nanning bear farm and start the two-year process of turning it into a sanctuary.

To date Animals Asia has rescued 285 bears in China. This will be the biggest bear rescue yet attempted anywhere in the world.

The deal came about after company executives said they were losing money on the venture. The company had invested about eight million yuan (€930,000) in the farm and had not yet started to sell bile. It stopped extracting bile from the bears two years ago.