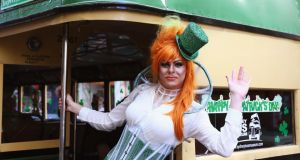 Drag Queen Peachy Queen poses from the back of a bus, and prepares to march in the St Patrick’s day parade on behalf of all gay, lesbian, bisexual and transgender people for the first time today in Sydney, Australia. Photograph: Don Arnold/Getty Images

The marchers re-enacting the Battle of Clontarf were able to use their shields as impromptu umbrellas, but many county GAA jerseys and ‘Kiss me, I’m Irish’ T-shirts were soon soaking wet, and the Irish dancing school girls’ carefully curled hairdos were looking distressed.

An enterprising soul - who had checked the weather forecast - was soon doing a roaring trade in green ponchos. There was no shortage of takers among the estimated 30,000 strong crowd.

Twenty-five minutes later thunder and lightning started. Luckily the Irish wolfhound club (joined by a couple of red setters who snuck in at the tail end) had already passed the viewing stand at Town Hall.

Minister for Agriculture, Food and the Marine, Simon Coveney, was in Sydney for the parade.

“I think it’s really important that senior representatives of the Irish Government go to parts of the world where there has been and continues to be a really strong Irish influence,” he told The Irish Times .

“We need to let people know that they’re not forgotten, that they’re very much part of Ireland … One of the things I’ve been saying everywhere [in Australia], particularly to young people who have come here in the last number of years, is that hopefully in the not-too-distant future there will be an opportunity for them back home, if they want to come back home to work.”

Mr Coveney has held several meetings on his trip to Australia, including with federal and state ministers. He will then travel on to New Zealand.

After the parade, those not turned off by the rain went to Hyde Park where there was Irish food, drink and music, and dozens of Irish people became Australians in a citizenship ceremony.

For the first time in almost three decades, there will be no St Patrick’s Day Mass held in Sydney’s St Mary’s Cathedral.

In order to save on costs, the Mass, which will be celebrated by Bishop of Down and Connor,  Noel Treanor, has been moved to the smaller St Patrick’s Church.

The sails of the Sydney Opera House will be lit up in green tomorrow in honour of St Patrick’s Day.

As well as the Sydney parade, there were also St Patrick’s Day parades in several other Australian cities and towns over the weekend.