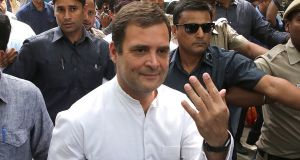 Rahul Gandhi: “Rebuilding the party requires hard decisions and numerous people will have to be made accountable for the failure of 2019,” he wrote. Photograph: Rajat Gupta/EPA

Rahul Gandhi, leader of India’s opposition Congress party, said on Wednesday he had asked party bosses to find a successor after he took responsibility for losing a general election that has left the party in crisis.

Mr Gandhi, the fourth generation scion of the Nehru-Gandhi dynasty, released a public letter to colleagues in which he appeared determined to relinquish his family’s control over the 133-year old party and called for its radical transformation.

“Rebuilding the party requires hard decisions and numerous people will have to be made accountable for the failure of 2019,” Mr Gandhi wrote.

“It would be unjust to hold others accountable but ignore my own responsibility as President of the party,” he added.

Congress suffered a mauling for a second general election in a row from prime minister Narendra Modi’s Hindu nationalist party. Mr Gandhi himself lost the traditional family seat in the northern state of Uttar Pradesh.

Mr Gandhi (49) announced his decision to quit as Congress leader in May, but the party leadership refused to accept it. They pressed him to reconsider, saying the party needs a unifying figure from the family to avoid splintering.

It is an honour for me to serve the Congress Party, whose values and ideals have served as the lifeblood of our beautiful nation.

I owe the country and my organisation a debt of tremendous gratitude and love.

At the very least, they said he must name a successor.

Mr Gandhi has said the party’s decision-making Congress Working Committee (CWC) should launch a search for a new party president in which he would not play a role.

“Immediately after resigning, I suggested to my colleagues in the Congress Working Committee that the way forward would be to entrust a group of people with the task of beginning the search for a new President,” he said in the letter.

Under Congress’s constitution, the senior-most general secretary of the party would take over as interim president, which currently would put Motilal Vora (90) in the top job.

For most of nearly 70 years, Congress has been controlled by a member of the family, beginning with India’s first prime minister Jawaharlal Nehru.

Sonia Gandhi, who remains an influential figure after Rahul succeeded her as party president in 2017, has not commented.

His sister, Priyanka, who formally joined the party just weeks before this year’s general election, holds a key post in Congress. She also has not commented.

Many Congress officials have not yet given up hope that Mr Gandhi will reconsider his resignation.

“We request Rahul Gandhi to lead from the front to take on the upcoming political challenges,” Sachin Pilot, Congress leader from western Rajasthan state, told reporters.

“Not just Rajasthan, but the people of India, have asked him to change his mind, take back his resignation and work as president again,” he added. – Reuters

1 UK to close borders to non-English speakers and unskilled workers
2 New Sinn Féin TD apologises for ‘glib, off-the-cuff tweets’
3 A Russian cruiser with ‘cannibal rats’: What other ‘ghost ships’ could be out there?
4 Jump in young Irish adults living with parents among highest in EU
5 Draining the swamp? Trump in spree of clemency for rich white men
Real news has value SUBSCRIBE