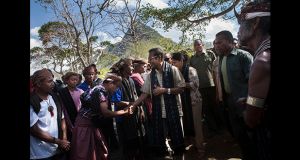 East Timor’s President, Taur Matan Ruak takes regular trips to the most remote districts and walks from village to village to talk to villagers, here he is greeted by the village elders in Marobo. Photograph: Cedric Arnold/realfeatures.com 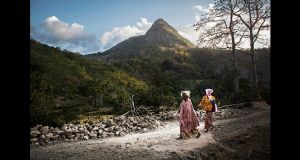 Villagers walk back to their village on a small mountain road in Marobo. Photograph: Cedric Arnold/realfeatures.com 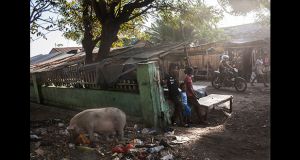 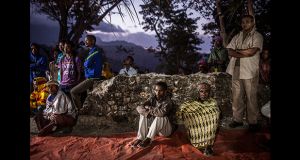 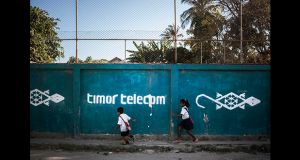 School children on their way to school run past a hand painted Timor Telecom advertisment on a wall. Photograph: Cedric Arnold/realfeatures.com 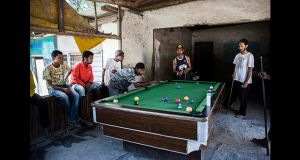 In the village of Marobo, a gruelling seven-hour drive from Dili, the capital of Timor-Leste, the arrival of president Taur Matan Ruak has all the hallmarks of a homecoming.

Villagers have gathered, eagerly awaiting his visit. When he arrives in the company of his wife, Isabel Ferreira, and their three children, the youngest of whom is asleep on her shoulder, they are formally greeted by the village elders and ushered into the excited crowd.

After a short pause for prayer, the president launches into his latest “community dialogue”. The venue is a makeshift corrugated iron structure with a roof woven from palm leaves, and the president and his entourage are perched on precarious plastic chairs while members of the local community hunker on large rattan mats spread out across the floor.

Taking a crackly microphone in hand, villagers one by one air their concerns, which offer a good insight into the challenges faced throughout rural Timor-Leste. They include the lack of access to water, electricity, health care facilities, education, poor infrastructure, and the ever-contentious issue of veteran pensions. The president listens attentively throughout, jotting down notes.

Once everyone has had the opportunity to speak, Ruak takes to the floor. Showing no sign of weariness, he zealously addresses the community at length. Going point by point through every issue that has been raised, he cites clearly what is realistically possible and makes suggestions as to what they as a community can do to improve their lot.

He also promises to convey their concerns to prime minister Xanana Gusmao. The dialogue continues long into the evening, with villagers enveloped in blankets in an attempt to keep the cold mountain night at bay, while the president dons a denim jacket.

With proceedings at an end, he and his wife invite the entire village to join them for a meal of chicken and rice. The mood is distinctly familial and festive, with palm wine provided by the elders.


‘Ageing rock star’
Taur Matan Ruak was sworn in as president of this small south east Asian country of 1.1 million people on May 20th last year, the same day Timor-Leste (alternatively East Timor) marked the 10th anniversary of its independence.

A trim, bespectacled statesman in his late 50s, Ruak bears little resemblance to the Economist magazine’s portrayal of him as a guerrilla commander during the country’s fight for independence: “like an ageing rock star [with] frizzy hair in a long ponytail and [..] a camouflage jacket over faded jeans”.

He appears to have refined his look during his nine years at the helm of the country’s military, the Forcas de Defensa de Timor Leste.

Running as an independent in the 2012 presidential elections, he campaigned strongly on his credentials, not only as a former guerrilla commander, but also as a man of the people.

“I do not have a university degree, my way of studying is by observing and listening to others,” he says.

To underline his grassroots approach, since June of this year Ruak has embarked on a series of “suco visits” (or community visits) in some of the most isolated corners of the country. Such is the remoteness of these communities that to reach them, the president often has to travel long distances by foot across wildly inhospitable terrain.

The aim of these visits is for the president to share updates on the country’s development but also to familiarise himself with conditions on the ground and to instigate a dialogue that allows him to hear directly of peoples’ concerns.

That these mountain walks are also a personal pilgrimage is clear: “I spent 24 years of my life in the jungle during the fight for independence. These people’s contribution to our country’s independence was huge. They helped me and I do not want them to feel forgotten. I want that these people have a better life.”

The presidential role in Timor-Leste being primarily ceremonial, Ruak’s power lies in making recommendations to the government based on what he hears at grassroots level. But he insists people should be empowered to take the development of their communities into their own hands.


Past dominates
In a country where the past can still seem to dominate the present, Ruak has made a point of surrounding himself with a team of bright young people, which seems appropriate in a country in which over 60 per cent of the population is under 25.

I meet the president the morning after the community dialogue in Marobo. It is 6.15am and he has already bathed in the local river and finished a meeting with the village elders. He emerges from a tent, where he and his family have spent the night, with a sprightly step.

In Ruak’s view, the key challenge for Timor-Leste is how to translate the country’s increasing wealth into sustainable growth. “Countries that base their development on oil and gas never do well,” he states. “Oil and gas makes people lazy. There’s dignity in hard work”.

His frustration with the pace of progress is evident. “We spend $40 million importing rice from Thailand and Vietnam every year. Another $19 million on bottled water. Why can’t we do that here?”

This is a particular concern with regard to the extractive industries. All the oil and gas produced in Timor-Leste is unrefined and needs to be exported. To meet domestic demand for fuel, the country depends heavily on imports from Indonesia. “If we can refine it here, it’ll make a big difference to the economy”.

In marked contrast to his predecessor, Jose Ramos Horta – a Nobel Peace Prize laureate wholly at ease in the international arena – the focus of the first year of Ruak’s presidency has been firmly fixed on the domestic front. Keen to emphasise this point, he announced he would not travel overseas in his first year of office; a pledge he kept, making his first official overseas trip to Indonesia in June of this year.

Since then Ruak has decidedly upped the pace, making state visits to Australia, New Zealand, Portugal and Cuba. He has also addressed the UN general assembly.

He is eager to make a final point before our interview ends. “Independence is not complete and the fight for prosperity is more difficult than the previous fight,” he proclaims. “I want to inspire the people to keep this fighting spirit.”

And with that, he takes off with a brisk stride up a mountain trail, his entourage of young aides at pains to keep up.


This feature was supported by the Simon Cumbers Media Fund.