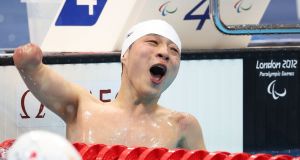 Xu Qing, who lost both arms in a car accident at the age of six, is nicknamed “The Shark” because of a tattoo on his back. Along with other Paralympians, his success is helping to change Chinese attitudes to disabled people.

After what was by Chinese standards an underwhelming performance at the Olympics, the response to swimmers Huang Wenpan and Xu Qing taking five and three gold medals each at the Paralympics in Rio was one of wild celebration.

A disabled child is often considered a shameful secret to be hidden in many families, but the success of the Paralympics team, winning 107 gold, 81 silver and 51 bronze medals, has significantly raised the profile of disability issues in China.

In China, there are 85 million disabled people, more than 70 per cent living in rural areas, but the profile of people with disabilities has long been much lower than in the West and discrimination is widespread.

A study by Save the Children this month showed two-thirds of parents in China said they would be concerned if mainstream schools allowed disabled children to study with those who are not. Nearly half of the parents surveyed said they were worried their children may pick up bad habits by mingling with disabled children, the Caixin magazine reported.

Xu Qing, who lost both arms in a car accident aged six but was pushed to take up swimming by a doctor, is nicknamed “The Shark” because of a tattoo on his back. His success at sport has also earned him the nickname “Ten Golds”.

Mainstream media was widely slammed online for not giving enough coverage to the Paralympics, and people took to social media to hail athletes like Xu as “simply brilliant” and “our hero”, along with fulsome praise for the other Paralympians, including fellow swimmer Li Zhang who won four golds, wheelchair racer Zhou Hongzhuan who won three, and wheelchair fencer Zhou Jingling.

“We are making efforts for them to have a better quality of life gradually, and integrate disabled people into society. It is true that disabled athletes are only a small part of the disabled population but they provide inspiration and leadership to society to focus more on benefits for the disabled,” he told The Irish Times in an interview.

Yang concedes the situation in China for people with disabilities has a long way to go. The streets of the capital are not that convenient for disabled people. “Things are getting better, though obviously disabled people still are not like non-disabled people,” he said.

According to the CDPF, nearly 30 per cent of disabled children aged six to 14 have no access to nine years of compulsory schooling, because schools refuse to accept them. Only 58 per cent of children with disabilities in China go to conventional schools.

These kind of statistics have engendered sympathetic postings on the social network Weibo. A commentator called Shanzha wrote: “The number of gold medals won can’t make up the fact that China lacks an infrastructure for disabled people and lacks social benefits. Developed countries have a more complete system, China still needs to make a lot more effort.” Another blogger called Jewler wrote: “Does anyone really understand the ordinary life of a disabled person? The disabled even have problems taking public transport.”

And despite the feelgood factor generated by the Paralympics, some attitudes remain. “In my opinion, the disabled only cause trouble by taking the subway. It’s stuffy enough for ordinary people, is it even rational to allow a guide dog on the subway? Aren’t you afraid of something happening to the dog? The disabled in China mostly have their family to look after them anyway.”

Achieving excellence in sport is seen as an important step in changing these stances.

China has trained more than 42,000 fitness instructors for disabled people and has built 225 provincial and 34 national specialised sports centres. Disability tends to be seen as a problem to be solved.

This month China’s cabinet, the State Council, issued a national action plan “aiming to effectively reduce new disabilities by 2020 through promoting awareness and early screening”. The government is introducing pre-natal check-ups and health checks to screen for hereditary conditions which will respectively cover 60 per cent and 80 per cent of females over the next five years, the Xinhua news agency reported.

The implication is that pregnancies where disabilities are discovered would be terminated. Where a foetus is discovered to have Down syndrome, for example, 95 per cent of women terminate the pregnancy, a figure that compares with countries such as Denmark, where the figure is between 95 and 98 per cent. While there is a major ethical discussion in the West about abortion where the foetus is disabled, this debate is absent in China where abortion is one of the most common methods of population control as part of the one-child, and now the two-child, policy.