Over 2,500 migrants still adrift, according to the UN 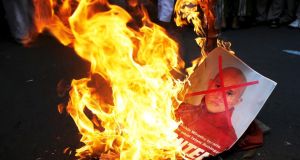 Indonesia’s hardline Islamic Defenders Front members burn a picture of Buddhist monk Ashin Wirathu, a proponent of the Buddhist extremist movement in Burma (Myanmar) known as 969 and was once jailed by Burma’s former military junta for anti-Muslim violence, during a protest in front of the Burmese Embassy in Jakarta on Wednesday. Photograph: Reuters

More than 2,500 migrants could still be stranded on boats in the Bay of Bengal and Andaman Sea, according to estimates by the United Nations, as Thailand prepares to host a regional meeting it said was focused on “immediate action” to tackle the crisis.

Thousands of Rohingya Muslims from Burma (Myanmar) and migrants from Bangladesh have tried to land in Thailand, Malaysia and Indonesia since a Thai crackdown on people smugglers in early May led to trafficker crews abandoning them at sea.

Regional governments have struggled to respond, although images of desperate people crammed aboard overloaded boats with little food or water prompted Indonesia and Malaysia to soften their initial reluctance to allow the migrants to come ashore.

More than seven boats carrying around 2,600 people are thought to be still at sea, according to data from UNHCR and the International Organisation for Migration (IOM) sources.

Friday’s meeting in Bangkok will bring together 17 countries from the Association of Southeast Asian Nations (ASEAN) and elsewhere in Asia, along with the United States, Switzerland and international organisations.

“The meeting focuses on immediate actions to tackle the issue,” said Panote Preechyanud at the Department of Information at the Thai ministry of foreign affairs on Wednesday.

“It is an urgent call for the region to comprehensively work together to address the unprecedented increase of irregular migration across the Bay of Bengal in recent years.”

The gathering takes place against the grim backdrop of Malaysia’s discovery of nearly 140 shallow graves at 28 suspected people smuggling camps strung along its northern border, some of which authorities believe were abandoned in haste when the Thai crackdown began.

Thailand, under pressure from the United States to do more to combat people smuggling, began the crackdown after finding at least 36 bodies in similar graves just across the border.

That made it too risky for smugglers to bring their human cargo ashore, since when more than 3,000 migrants left to fend for themselves have landed in Malaysia and Indonesia.

Southern Thailand and northern Malaysia are part of a well-trodden route for people smugglers transporting Rohingya Muslims, who say they are fleeing persecution in Myanmar, and Bangladeshis escaping poverty at home.

The UNHCR, the UN’s refugee agency, cautioned that its figures for those still risking sickness and starvation at sea were loose estimates.

“What we know is the arrivals especially in Indonesia where we have full access and in Thailand where we have access,” said Vivian Tan, a spokeswoman for the UNHCR in Bangkok.

“In Malaysia the figures are from the government and in Myanmar we have an estimate. What we’re not sure about are those who are still at sea. This is a combination of media reports, survivor accounts and any other local resources.”

Malaysia, which says it has already taken 120,000 illegal immigrants from Myanmar, and Indonesia said last week they would give temporary shelter to those migrants already at sea, but that the international community must shoulder the burden of resettling them.

Thailand has refused to allow the boats to land, saying it is already sheltering 100,000 migrants from Burma, but has deployed a naval task force to offer medical aid at sea.

The UN and the United States have said the deadly pattern of migration across the Bay of Bengal would continue unless Burma ends discrimination against the Rohingya, a mostly stateless minority of 1.1 million people who live in apartheid-like conditions.

Burma denies the Rohingya face persecution and says it is not the source of the problem, suggesting many of the “boat people” are economic migrants from Bangladesh.