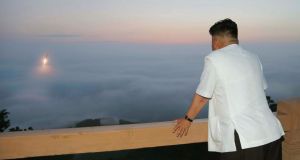 North Korea said on Saturday it has successfully conducted an underwater test-fire of a submarine-launched ballistic missile, which, if true, would indicate progress in the secretive state’s pursuit of building missile-equipped submarines.

The North’s leader Kim Jong Un oversaw the test-launch from a location off-shore as the submarine dove under water and “a ballistic missile surfaced from the sea and soared into the air, leaving a fiery trail of blaze,” the official KCNA news agency said.

“Through the test, it was verified and confirmed that the underwater ballistic missile launch from a strategic submarine fully achieved the latest military, scientific and technical requirements,” KCNA said.

North Korea is under United Nations sanctions banning it from developing or using ballistic missile technology.

The report did not mention the date or the exact location of the test, but a separate KCNA dispatch on Saturday said Kim gave field guidance at a fishery complex in Sinpo, a port city on the country’s east coast and the location of a known submarine base.

North Korea has been seen to be developing the missile-launch capability for its fleet of submarines, although experts have questioned whether the state would have the financial and technical resources to build an operational system.

In January, a research group at Johns Hopkins University’s US-Korea Institute said on its website that satellite imagery showed possible evidence of work on vertical launch tubes on a submarine that could be for ballistic missiles.

The vessel could serve “as an experimental test bed for land-attack submarines”, the group said in a report, although it cautioned such a test would be expensive and time-consuming “with no guarantee of success”.

North Korea’s state media often boasts of successful military and space accomplishments, including the launch of a functional communications satellite, which do not get independently verified by outside experts.

But it is widely believed to have succeeded in launching a long-range rocket and putting an object into orbit in December 2012, defying widespread scepticism and international warnings not to pursue such a programme, which could be used to develop intercontinental missiles.

The North has an arsenal of land-based ballistic missiles and last test-fired a mid-range missile in March last year, drawing further condemnation from the international community.