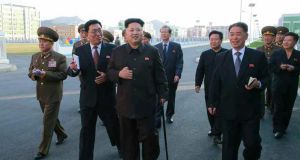 North Korean leader Kim Jong Un, using a cane for support, visited a housing development, state media reported today, ending a lengthy absence from public view that had fuelled speculation over his health and grip on power in the secretive country.

Several pictures on the front page of today’s Rodong Sinmun newspaper showed Kim smiling and gesturing, surrounded by aides and wearing his signature dark buttoned suit and appearing to be supporting himself with a black cane.

The 31-year-old Kim had not appeared in public since attending a concert with his wife on September 3rd, missing an important political anniversary on Friday as well as a recent session of the country’s parliament.

A story in the official KCNA news agency on two public appearances by Kim was dated today but did not specify on which day he made the visits. It also did not mention Kim’s lengthy absence from public view.

The KCNA story, which was typical of the state media’s chronicling of Kim’s activities, said he “gave field guidance” to the new Wisong Scientists Residential District and visited the newly built Natural Energy Institute of the State Academy of Sciences.

“Our scientists are patriots who are devoting all their lives to building a rich and powerful nation,” Kim was quoted as saying by KCNA.

The reports of Kim’s activities may be aimed at dispelling rumours outside the country and to ease any concern inside the North and its military following an exchange of gunfire on Friday between North and South Korea, an analyst said.

“He’s the military leader, and there was military action a few days ago,” said An Chan-il, who served in the North’s army as a junior officer before defecting to the South in 1979, and now heads a private think tank on North Korea in Seoul.

“There was likely concern inside the North’s military as well as among the public,” which would be eased by Kim’s reappearance, he said.

North Korean officials had denied that Kim’s public absence since early September was health-related. Officials in both the United States and South Korea had said recently that there were no indications Kim was in political trouble.

A source with access to the North’s leadership said Kim was in firm control of the country but had hurt his leg taking part in a military drill.

Kim, who has visibly gained weight since coming to power after his father died of a heart attack in 2011, had been seen walking with a limp since an event with officials in July.

Speculation that Kim’s unusually long absence from public view may be due to ill health was fuelled by a North Korean television report late last month that said he was suffering from “discomfort”.

Some North Korea watchers had also suggested that Kim may have been sidelined in a power struggle.

His prolonged absence from public view was not the first. In June 2012, six months after coming to power, state media failed to report on or photograph him for 23 days. He reappeared the next month, visiting a dolphinarium.