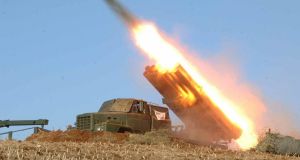 North Korea has fired a volley of six short-range missiles into the sea off the country’s east coast, apparently in an act of defiance after the UN Security Council signed off on its toughest round of sanctions yet. The council’s decision came in the wake of Pyongyang’s recent nuclear and rocket tests.

The 15-nation council unanimously adopted Resolution 2270, following a long-range rocket launch last month and a nuclear test in January, which were condemned by the international community.

The resolution broadens the scope of existing financial sanctions to blacklist 16 new individuals and 12 organisations. It also requires new mandatory inspections of all cargo going into and out of the North.

It bans the North’s exports of coal, iron ore, gold and rare earth metals, which make up nearly half of the country’s total exports, and also prohibits the supply to the pariah state, also known as the Democratic People’s Republic of Korea, of all types of aviation fuel, including rocket fuel.

The missiles were fired from Wonsan, a port city in the east, at about 10am local time. They flew about 150km before falling into the sea, South Korean defence ministry spokesman Moon Sang-gyun said.

All eyes now turn to North Korea’s only meaningful ally and by far its biggest trading partner, China, to see if it will enforce the sanctions. China does not want the US to gain influence in a neighbouring country should the North Korean economy collapse and Beijing is also wary of the possibility of a significant influx of refugees from an ideological ally once seen as being “as close as lips and teeth”.

Beijing is also angry that Seoul has started talks with Washington about deploying a US-made missile defence system in South Korea, as China believes it could also be used against its weapons systems.

“The sanctions are not the objective itself,” China’s UN ambassador Liu Jieyi said after the vote, adding how China had always expressed its explicit opposition to the tests. “China has always insisted on denuclearisation of the Korean peninsula, insisted on the maintenance of peace and stability on the peninsula, and insisted on resolving problems through dialogue and consultations,” Mr Liu said.

In its sanctions report, China’s state news agency Xinhua adopted a moderate tone and urged the resumption of long- stalled six-party talks involving Beijing, both Koreas, Russia, Japan and the US.

Many of North Korea’s citizens are facing food shortages and other economic hardships. China said the latest UN sanctions were not intended to affect the livelihood of people in North Korea, saying the document contained language allowing for humanitarian exemptions.