New Australia leader sticks to script with focus on the economy 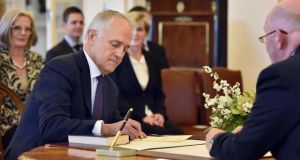 Malcolm Turnbull, Australia’s prime minister and leader of the Liberal Party, is sworn in at Government House in Canberra, Australia. Photograph: Mark Graham/Bloomberg

New prime minister Malcolm Turnbull dashed hopes of swift action on progressive issues such as same-sex marriage after he was sworn in as Australia’s fourth leader in two years on Tuesday, promising instead to focus on improving a faltering economy.

The conservative Liberal Party voted in a secret ballot late on Monday to oust Tony Abbott as its leader in favour of Mr Turnbull, a multi-millionaire former tech entrepreneur who is popular with the electorate.

“I’m filled with optimism and we will be setting out in the weeks ahead ... more of those foundations that will ensure our prosperity in the years ahead,” Mr Turnbull told reporters as he headed to parliament on Tuesday before being sworn in.

Mr Abbott was deposed barely two years into his three-year term after months of opinion polls that showed his popularity near rock bottom as Australia’s $1.5 trillion economy struggles to cope with the end of a once-in-a-century mining boom.

Mr Turnbull had previously been unpalatable to his party’s right-wing because of his progressive views on climate change, same-sex marriage and making Australia a republic.

In his first address to parliament as leader, Mr Turnbull stuck to the ruling coalition’s timetable set under Mr Abbott and said Australians would vote on same-sex marriage after elections due next year.

Mr Abbott’s dismal performance and over-reliance on slogans to sell his major policies, including a hardline approach to refugees, eventually wore down internal opposition to Mr Turnbull.

Mr Abbott pledged to make the leadership transition as smooth as possible but, in his last address as leader on Tuesday, also expressed concern that “a revolving door prime ministership can’t be good for our country”.

Australia has been convulsed by backroom machinations and party coups in recent years that have shaken public and business confidence in government.

“There will be no wrecking, no undermining, and no sniping,” Mr Abbott told reporters.

The Nationals, the minor partner in the ruling conservative coalition, pledged to work with Mr Turnbull.

“A close working team is essential to delivering the good government Australia expects from their elected representatives,” Nationals leader and deputy prime minister Warren Truss said in a statement.

Mr Turnbull, a staunch republican, was sworn in at government house in Canberra by governor general Peter Cosgrove, Queen Elizabeth II of Britain’s representative in Australia.

Parliamentarians from both sides of the aisle briefly set aside partisan bickering to praise the outgoing Mr Abbott.

“I have exchanged harsh words with him in my time as opposition leader,” said Labor Party leader Bill Shorten.

“I’ve disagreed with his politics and decisions on many occasions but I also wish to record that he had this frustrating ability on occasion, just when you were really frustrated with a particular decision he might have made, to do something unexpected and generous and personal.”

Mr Turnbull’s ascension is seen by many political analysts as restoring stability because he presents a more formidable foe to face the Labor Party at elections due in about a year.

“Malcolm Turnbull is much more of a threat to the leader of the opposition than Tony Abbott was,” said Peter Chen, a senior lecturer in government at Sydney University.

“It looks like, unless things really change, the government will get a second term in office.”

Significant changes are expected when Mr Turnbull, who had been toppled as Liberal Party leader by Mr Abbott in 2009, unveils his ministry later this week. The respite from partisanship was short-lived as opponents sought to influence those changes.

The Greens Party immediately called on Mr Turnbull to remove children from a controversial immigration detention centre on the Pacific island nation of Nauru, where asylum seekers arriving in Australia by boat are sent for processing.

“I urge Mr. Turnbull to show that Australia is strong enough to care for refugees by releasing the children that are locked up offshore,” Greens senator Sarah Hanson-Young said in a statement.

Treasurer Joe Hockey, who has been battling a backlash against a deeply unpopular budget, and defence minister Kevin Andrews, who is overseeing a A$50 billion submarine tender, are both expected to be replaced.

Australia’s revolving door leadership has plagued both major parties. Labor’s Kevin Rudd, elected prime minister with a strong mandate in 2007, was deposed by his deputy, Julia Gillard, in 2010 amid poll numbers as dismal as Abbott’s.

Ms Gillard was in turn deposed by Mr Rudd ahead of the 2013 elections won by Abbott.