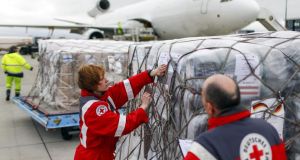 Two women rest and sleep in a football field in Siliguri on Sunday hit the region on April 25th. Photograph: AFP/Getty Images

Efforts are continuing to make contact with all Irish citizens known to have been in the region affected by the 7.8-magnitude earthquake in Nepal.

Minister for Foreign Charlie Flanagan said contact has been made with the “vast bulk” of the 120 or so Irish citizens in the region.

He said the department was doing all it could to establish the whereabouts of anyone unaccounted for.

Most of the dozen or so Irish people listed as missing by the International Committee of the Red Cross, meanwhile, have since been accounted for.

But the family of Ciarán Sands (55) from Drogheda, who had been travelling in the region, was still waiting for news on his whereabouts last night.

Ciarán’s sister Clodagh posted a message on Facebook, seeking information. “He is trekking in the Annapurna region, where communication is poor,” the message said. “We are very worried.”

Mr Flanagan said the Department of Foreign Affairs has established an emergency consular response team which is assisting citizens and their families in the region.

“The department is aware of some 120 Irish citizens currently in Nepal and the vast majority of our citizens have now been accounted for. Communications remain difficult, and some citizens are believed to be in remote areas, so it may be several days before all citizens can be contacted,” he said.

“Our emergency response team in Dublin and our consular team at our embassy in New Delhi will be maintaining ongoing contact with citizens affected and their families for as long as assistance is required.”

There was good news for the families of others who had been listed as unaccounted for in the Red Cross list.

A sister of Sinéad Nic Cionna (31) from Monaghan, who was also trekking in the region, confirmed that she was safe and well last night.

Alexandra “Alex” Murphy (25) from Dublin and her boyfriend, Arron Conran, have also been accounted for and are safe, according to Ms Murphy’s sister Sarah. She said the family was relieved after a “horrible 24 hours”.

Other Irish people who were originally listed as unaccounted for by the Red Cross but have since made contact with their families include:

The Government, meanwhile, has announced it will provide up to €1 million in life-saving assistance to families displaced by the earthquake.

The assistance will be provided through Irish Aid’s partners and will be targeted at the most vulnerable, he said.