Graves believed to contain bodies of hundreds of trafficking victims 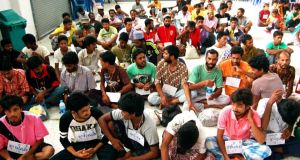 Suspected ethnic Rohingya migrants from Myanmar and Bangladesh rest as they were detained at the district hall in Rattaphum district Thailand, May 9th 2015. Police discovered a mass grave in the southern province of Songkhla containing 26 bodies at an abandoned camp used by human traffickers. Photograph: EPA.

Home Minister Ahmad Zahid Hamidi said officials are determining whether the graves were of human trafficking victims, but did not say how many dead bodies were discovered.

“This is still under investigation,” he told reporters at the sidelines of an event in Kuala Lumpur.

According to media reports, the mass graves were believed to contain bodies of hundreds of migrants from Myanmar and Bangladesh.

Police discovered 30 large graves containing the remains of hundreds of people in two places in the northern state of Perlis, which borders Thailand, the Utusan Malaysia newspaper reported.

The Star newspaper reported on its website that nearly 100 bodies were found in one grave on Friday.

“I reckon it was a preliminary finding and eventually I think the number would be more than that,” Ahmad Zahid said when asked about reports of the number of mass graves discovered.

Ahmad Zahid said that the camps identified are in the areas of Klian Intan and villages near the border.

“They have been there for quite some time. I suspect the camps have been operating for at least five years,” he said.

A police spokeswoman declined to comment saying a news conference on the issue would be held on Monday.

A police official who declined to be identified said police commandos and forensic experts from the capital, Kuala Lumpur, were at the site but it was not clear how many graves and bodies had been found.

“Of course I believe that there are Malaysians involved,” Ahmad Zahid said, when asked on possible involvement of locals in the incident.

Northern Malaysia is on a route for smugglers bringing people to Southeast Asia by boat from Myanmar, most of them Rohingyas, who say they are fleeing persecution, and people from Bangladesh seeking work.

Smugglers have also used southern Thailand and Utusan Malaysia and police believe the discovery had a connection to mass graves found on the Thai side of the border this month.

Twenty-six bodies were exhumed from a grave in Thailand’s Songkhla province, over the border from Perlis, near a camp with suspected links to human trafficking.

More than 3,000 migrants, most of them from Myanmar and Bangladesh, have landed on boats in Malaysia and Indonesia this month after a crackdown on trafficking in Thailand.