Thomas Drumm (55) is alive and well according to family members 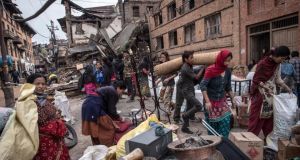 Nepalese victims of the earthquake carry their belongings among debris of homes on April 29th, 2015 in Bhaktapur, Nepal. Photograph: David Ramos/Getty Images

The family of Monaghan native Thomas Drumm say he has made contact with home and is safe and well in Nepal following last weekend’s earthquake.

Mr Drumm (55), who lives in the UK, was the last person on the list of a dozen or so Irish citizens published by the Red Cross who had been unaccounted for following the natural disaster which has so far claimed the lives of at least 4,800 people.

Speaking on local radio in Monaghan, cousin David Drumm said he received an email from Thomas at close to 5am this morning saying he is “fine”.

It follows the news yesterday that Dundalk man Ciarán Sands (55) managed to escape the devastation unharmed while trekking in the Himalayas. His family had expressed concern for his safety on social media earlier this week.

Other Irish people who were listed as unaccounted for by the Red Cross but are understood to have since made contact with their families include:

The latest update from the Department of Foreign Affairs says that 10 Irish people who were known to be in the Asian country at the time of the earthquake are yet to make contact with consular staff.

The department estimates that around 150 Irish citizens were in the region as of last Saturday, the majority of whom have successfully been contacted.

Unreliable communications infrastructure in remote areas of Nepal has made the task of finding foreign nationals significantly more difficult.

The department’s list does not name individuals, and officials have refused to confirm any cross-overs with the Red Cross list. A further update is expected later this afternoon.