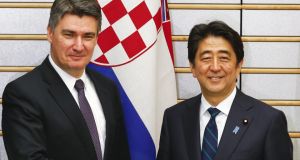 Japan’s prime minister, Shinzo Abe (seen here with his Croatian counterpart, Zoran Milanovic), is pushing for changes in the constitution so that the government could deploy the military if the country’s ‘existence’ is threatened. Photograph: EPA/Thomas Peter/Pool

Japan’s parliament is debating what many consider its most important legislation since the second World War. Prime minister Shinzo Abe wants to allow Japan’s armed forces to join in military activities abroad and defend foreign allies – principally the United States.

But Abe’s long-cherished aim to loosen the shackles of the country’s pacifist constitution and allow “collective self-defence” is beset by peace-mongers. Popular opposition is growing and most of Japan’s constitutional experts say the government’s security bills are illegal.

Abe’s difficulties were embarrassingly highlighted recently when three of the country’s top legal experts said his plans violated the constitution. One of them, Yasuo Hasebe, was handpicked by Abe’s Liberal Democratic Party (LDP).

The bills currently being debated in parliament would allow the Japanese Self-Defence Forces to roam further afield and play a more muscular role in the US-Japan security alliance.

Abe promised Washington during a visit there in April that he would pass the bills.

The government is now likely to extend the current session deep into the summer. Even with 60 more days of debate, however, legal experts are increasingly sceptical. More than 200 of them wrote to the government last week demanding it dump the bills.

More worrying for the government, the longer the debate goes on, the less support it seems to have. A poll by the state broadcaster last month found almost half the population did not understand the proposed changes. Another survey this month in the pro-LDP Yomiuri Shimbun newspaper showed opposition growing and running at nearly three-fifths.

One reason for the confusion is that the government has mostly declined to cite specific scenarios where collective defence might be invoked. Indeed, in a bid to convince a doubtful public, Abe seems to have spent more time ruling out foreign entanglements than explaining where Japanese soldiers might be sent into action.

Pressed by the opposition, LDP politicians have even suggested that Japan could withdraw from foreign conflict if the situation became too dangerous. Abe himself insists that the use of force under new rules of engagement would be permitted only under very specific conditions, notably when Japan’s “existence” is threatened.

Abe has consistently cited only one possible foreign operation: ending a blockade in the Strait of Hormuz, a key route for Middle East oil, on which Japan heavily depends. Hasebe, the constitutional expert, says even if such a blockade occurred, it is “highly unlikely” that it would endanger Japan’s existence.

Abe’s followers believe the constitution, which was written in 1946 during the American occupation, has kept the country weak and emasculated. To rewrite Article 9, however, they need a two-thirds majority of both parliamentary houses, followed by a national referendum. This hurdle has defeated every government before Abe.

The prime minister’s solution has been to ignore decades of legal consensus and read the constitution as he sees fit, says Hasebe. That sets Japan on a very dangerous road, he adds. “Any interpretation of any constitutional clause seems now up for grabs.”

Still, nobody is ruling out the possibility that Abe will get his way. With its coalition partner Komeito, the LDP controls more than two-thirds of seats in the lower house. That gives it a very big battering ram.

Setsu Kobayashi, one of the three constitutional scholars who testified against the government, hopes the ram will not be used.

“If the government forces through the policy without amending the constitution,” he says, “that would be the beginning of tyranny” and the “destruction of the rule of law”.