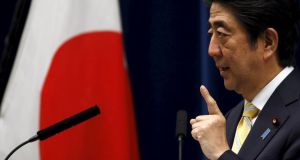 Japan’s prime minister Shinzo Abe: His cabinet has approved Bills to implement a drastic shift in security policy allowing the military to fight abroad for the first time since the second World War. Photograph: Toru Hanai/Reuters 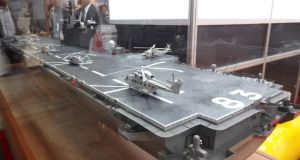 Naval might: Delegates to the MAST arms conference in Yokohama on Thursday view a model of the Izumo, Japan’s largest military vessel since the second World War.

Japan has sent another signal it is pulling away from its pacifist moorings with its first international defence show. The three-day event, hosting top military brass from Europe and America and showcasing some of the world’s most sophisticated maritime military hardware, comes as Japan’s parliament prepares to loosen the shackles on the nation’s armed forces.

The government of prime minister Shinzo Abe has submitted Bills to parliament that will allow the military roam further abroad, defend allies and provide them with back-up and supplies. The legislation, cleared by the cabinet yesterday and expected to pass the Diet this summer, is a turning point for the world’s third-largest economy, say analysts.

Japan’s former defence minister, Satoshi Morimoto, made thinly veiled reference to China in his opening remarks to the MAST Asia defence conference on maritime security in Yokohama. “The Asia-Pacific region is the centre of world growth,” he said. “Maritime security and freedom of navigation based on international rule of law are crucial for this region.”

China has alarmed Japan and its US allies with its growing military spending and muscle in East Asia. Washington this week hinted it might send warships and aircraft near the disputed Spratly Islands, where China is building huge artificial islands, and what appears to be a military airstrip. Beijing said it is “deeply concerned” by the reports of possible US patrols.

China’s turbo-charged expansion has reignited the threat of war over overlapping territorial claims with the Philippines, Taiwan, Vietnam and Malaysia. For three years, Chinese ships and aircraft have been engaged in a face-off with Japan’s Self Defence Forces (SDF) over tiny islands in the East China Sea, called Senkaku in Japan and Diaoyu in China.

Japanese troops have not fired a weapon in war since the military was defanged by the US occupation in 1945. Many of its companies switched to making civilian goods, and the nation’s corporate sector has more or less observed a total ban on weapons exports since the 1970s. But, for years, its military contractors have made small numbers of tanks, airplanes, submarines and frigates, mainly for the SDF.

Abe last year relaxed rules for co-operating with foreign defence contractors and the export of military hardware. While he rhetorically insists Japan’s door for dialogue with Beijing is open, the prime minister increasingly appears to favour a hard-shouldered approach that builds military and technical alliances to counterbalance China’s rise. “Co-operation in military equipment must be part of Japan’s proactive peace strategies,” he said last year.

Earlier this year, Japan’s maritime forces took delivery of the Izumo, Japan’s largest military vessel since the second World War. A 250m-long “flat-topped destroyer” loaded with helicopters and named after an armoured cruiser sunk by the US navy in 1945, the warship joins two other helicopter ships China has branded “quasi-aircraft carriers”. Japan has a larger navy than France and Britain combined, and it is building a fourth destroyer.

Most analysts doubt Japan will be a big player in the global arms industry – at least for now. Seventy years of pacifism means its weaponry is not battle-tested – a major selling point for US and Russian military contractors, said Robert Dujarric, director of the Institute of Contemporary Asian Studies at Temple University Japan.

“When the US sells arms to Japan or Korea, it’s implicitly part of the bigger package of American military support,” Dujarric said. “Japan can’t offer protection.”

“It’s also I think a reflection of the same door being opened from a military point of view. Japan has decided to play an even greater role in the international military arena.”