A man climbed to the top of the Sydney Opera House yesterday and was escorted down by police after he was attached to a harness. Onlookers watched as the man, who appeared intoxicated, spent about an hour on the building. Video: Reuters 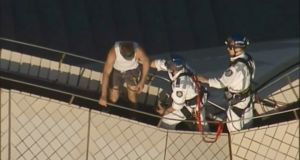 Policemen had to strap a harness to a man at the top of the Sydney Opera House yesterday.

A man who climbed to the top of the Sydney Opera House yesterday had to be rescued by police after spending about an hour on the building’s iconic wings.

A video of the incident shows two policemen strapping a harness to the man, before he was escorted safely to the ground outside the harbour’s famous landmark.

The man appeared to be under the influence of alcohol and was shouting at onlookers from the top of the building before being rescued, local media reported.