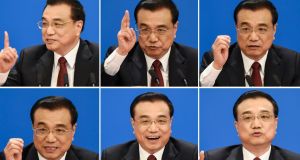 Chinese Premier Li Keqiang gesturing during a press conference after the closing session of the National People’s Congress in the Great Hall of the People in Beijing. Photograph: Getty Images

China’s premier Li Keqiang struck a conciliatory tone on regional disputes during his annual news conference at the end of the National People’s Congress in Beijing, and also said it was “impossible” that the world’s second largest economy would miss its targets on growth.

He was speaking after the closing ceremony of the annual parliament meeting in the cavernous, red flag-lined Great Hall of the People. Nearly 3,000 delegates representing the top leaders of the 78 million member Communist Party headed home across Tiananmen Square.

Mr Li said there was no contradiction between Beijing’s insistence on safeguarding its sovereign rights and its desire for peace and stability in the Asia-Pacific region.

“China believes in pursuing harmonious co-existence with its neighbours and we need a stable neighbourhood environment,” said Mr Li.

“It is natural that some differences arise between neighbours but as long as we treat each other with sincerity, these differences can be overcome,” he said. Beijing has maritime claims over almost all of the South China Sea, but nearly all of its neighbours in the region, including Brunei, Malaysia, the Philippines, Taiwan and Vietnam also have claims and have expressed concerns about China’s activities there.

China is building airstrips and deploying missiles on man-made islands in the area, raising tensions in the region and prompting accusations that Beijing is trying to militarise the area.

The US has also been sending Navy warships and flying aircraft over disputed territories to register its displeasure with China’s activities.

Mr Li’s style is very different from his predecessors, more relaxed and off-the-cuff and giving a far more open impression. The actual press conference itself has also become a much more spontaneous event than previously, when questioners were decided in advance and were carefully censored.

At the start of the annual parliament meeting, generally referred to as the ‘two sessions’, premier Li set out a growth target of between 6.5 and 7 per cent for 2016. Last year, the economy grew by 6.9 per cent, its lowest expansion in 25 years.

“It’s absolutely impossible for me to side with the view that we will miss our economic growth target this year,” said Mr Li.

“There are difficulties and hopes for the Chinese economy, but there are more hopes than difficulties .We have full confidence in the bright future of the economy because as long as we stay on the reform path we will grow. The government has overreached itself in some areas, but reform will stimulate market growth and vitality,” he told the assembled journalists from domestic and international media.

Asked about tensions between the US and China, Li pointed out how China had become the US’s biggest trading partner and that trade was the key to improved relations.

“Their bilateral common interests far outweigh their differences,” he said.