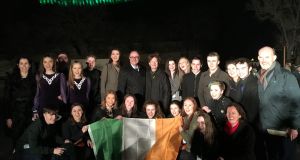 The ramparts of the Great Wall of China are illuminated in green at Badaling near the capital Beijing. 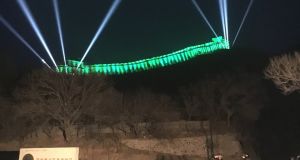 It may not be visible from space, but the ramparts of the Great Wall of China were clearly outlined in green at Badaling near the capital Beijing, as a group of Dublin school students joined Irish and Chinese guests for the greening of the Great Wall.

In chilly temperatures, Rebecca Fox and Sarah Farrell from St Colmcille’s School in Knocklyon performed a two-hand reel beneath the ramparts, accompanied by the Waterford-based band Cuisle, before the dozens attending the greening event joined in an impromptu ceili at the foot of the Great Wall.

Over 20 centuries old, the Great Wall once stretched 6,400 kilometres through China, from Shanhaiguan Pass in the northeastern province of Hebei to Jiayuguan Pass in the northwestern province of Gansu. The wall was originally built to defend China against invasion by northern nomadic tribes. These days, however, around 2,500 kilometres of the vast defensive structure is left standing.

The Great Wall has hosted a number of Irish events over the years, including a concert by the Chieftains in 1983, when the Irish folk band became the first Western musicians to play on the wall after the revolution of 1949.

The greening of the Great Wall was part of a Tourism Ireland initiative and that organisation’s country manager, James Kenny, gave a speech in flawless Chinese, which went down very well with the local dignitaries, as well as admiring comments from the young Irish students learning the language.

The illumination — the third time it has happenend — was overseen by Ireland’s ambassador to China, Paul Kavanagh, and he was joined by a number of Chinese officials including the deputy mayor of Yangqing district, Xie Wenzheng.

“We are the only country in the world to get this. The great Wall is a sacred icon of national heritage and it’s not a small thing. It’s a real gesture of friendship and we see it as such,” said Mr Kavanagh.

“It’s very important that Irish people don’t become blasé about the greening. We are a small country with a big heart and we are known as such. Everyone knows St Patrick’s Day and we should appreciate that,” he said.

Wei Yan, 28, a government official from Yanqing, said she was aware that St. Patrick’s Day as it was becoming a big deal.

“I know that it is celebrated not just in Ireland but also in the US, in places like New York City, that the colour is green and the plant... is it called the shamrock?” she said.

“I don’t know so much about the culture, but this is great for Ireland-China relations. We celebrate our national day on October 1st very differently, but things like the greening bring us closer,” she said.

Transition year head Eileen Ahern and Chinese teacher Orla Gilroy from St Colmcille’s, who along with principal John McKennedy brought 20 students from the school to China, also joined in the dancing.

“The people have been very welcoming, and open to showing us around, and we were particularly impressed when we took the overnight train to Xi’an,” said Ms Ahern.

St. Patrick’s Day is becoming an event in China. Other buildings that go green for the Irish national day are the Canton Tower in Guangzhou and various buildings in Shanghai. And this year, for the first time, one of the capital’s top primary schools, Fangcaodi, will mark the day by encouraging students to wear green.