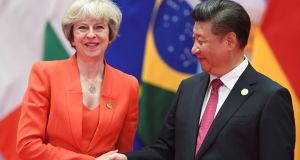 British prime minister Theresa May has sought to soothe fears about Britain’s decision to leave the European Union after the United States and Japan warned of the consequences of Brexit at the G20 summit in Hangzhou.

Ms May was extremely busy at the summit as she tried to reassure world leaders about post-Brexit Britain. The summit marked her first meeting with Chinese president Xi Jinping, and she was due to open talks with Australian prime minister Malcolm Turnbull.

Japan issued a 15-page report saying that its financial institutions would leave Britain if the benefits of EU membership, such as market access and residency rights, were not maintained. The Japanese industry report said that Japanese businesses had invested in Britain because it was a gateway to Europe.

“We strongly request that the UK will consider this fact seriously and respond in a responsible manner to minimise any harmful effects on these businesses,” the document said.

The report also warned of a possible outflow of drug research and development investment from Britain, though it said it expected the British government to handle its exit from the bloc smoothly.

US president Barack Obama said the UK was at “back of the queue” for a post-Brexit trade deal and said that while the US did not wish to punish Britain for leaving the EU, there was a fear that the trading relationship could “unravel”.

“It is absolutely true that I believed pre-Brexit vote and continue to believe post-Brexit vote that the world benefited enormously from the United Kingdom’s participation in the EU,” Mr Obama told a joint news conference with Ms May.

“We are going to make sure that the consequences of the decision don’t unravel those very strong relations.”

Ms May hailed a “golden era for UK-China relations”, a phrase that her predecessor had employed during Mr Xi’s visit to Britain last year, and a concept that many believed was dead in the water after Britain voted to leave the EU.

She warned that there were tough times in store for the British economy. “There’ll be some difficult times ahead,” she said, although she thought the reaction of the British economy to the Brexit vote had been better than expected.

Mr Xi told Mr Obama it was the responsibility of China and the United States to ensure a successful G20 summit and “inject momentum to the global economy while lifting confidence”, according to the Xinhua news agency.

The economy was the main topic for discussion between Mr Xi and Mr Obama as the two leaders and their economic advisers met for lengthy talks, followed by a walk around Hangzhou’s beautiful West Lake, where Mr Xi is hosting the G20 summit.