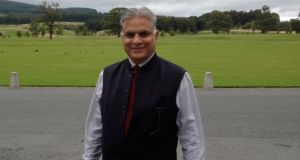 Wilson Saraj: “I never thought that they would attack in Peshawar.” 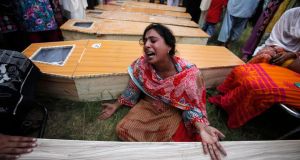 A Christian woman mourns next to the coffin of her brother, who was killed in the suicide attack. Photograph: Reuters.

When his nephew rang with news of the suicide bombing of All Saints church in Peshawar, Pakistan, on Sunday, Wilson Saraj was in bed. Suddenly he found that he was “Lying on the floor and my legs are not working.” It was as if he had been bombed himself.

For Mr Saraj, the massacre of worshippers at the church is more than just another disaster overtaking his country.

“For me it is a personal tragedy,” says Mr Saraj. His father, his brothers and sisters and their families still live in Peshawar and worship at the Anglican church, which dates from the nineteenth century. He counts two nephews, a niece and a cousin among the wounded and many friends among the 80 dead. “If I don’t know the children then I know the parents,” he says.

Mr Saraj is part of Pakistan’s huge diaspora living in Wiltshire, England, and is relaying the tragic events over the phone. He is projects manager for the Christian organisation the Barnabas Fund, which supports Pakistan’s Christians through its education projects, health food parcels and legal aid.


Protection lacking
After Sunday’s attack furious Christians said that government protection for them was lacking. Mr Saraj agrees with this. He adds “ But I must express appreciation of the role of local [Muslim] neighbours after the attack. I want to emphasise that they helped, they transported people to hospital and so on. They were very good. ”

“Every Sunday the church is jammed, packed,” he says. “People have to sit on the floor. At Christmas and Easter there is extra seating in the compound outside.”

Mr Saraj is 52. When he was a little boy, about three or four years old, his brothers and sisters started to bring him with them to Sunday school at All Saints. His sister Venus, since deceased, always held his hand on the way. “She was like a second mother to me.”

Mr Saraj occasionally played a tabla, a local drum, in the church choir.

Afterwards children ran around under the trees – “a type of orange tree”, says Mr Saraj – which then surrounded the church. Most of the trees are gone now, swept away by building developments.


After partition
Even then the Christian community in Peshawar was a large one, although on the historic details Mr Saraj is remarkably vague. “My father came to Peshawar in 1946/47 from Punjab, before partition, looking for work. My grandfather was Christian. It was my great grandpa who came to the Lord. Maybe he is Hindu. Or he could have been a Sikh.”

Just like in Ireland, religious groupings polarised in India and Pakistan after partition. Mr Saraj says there are 5 million Christians in Pakistan now – less than 4 per cent of the population. Attitudes hardened after 9/11, he says. In another development echoed in the history of modern Ireland, suddenly the definition of what it took to be a patriotic citizen narrowed : in the new Pakistan you had to be a Muslim. “As a Pakistani Christian they relate you with the West. But we are very Pakistani. We are from that same soil,” he says.

Still, Peshawar was peaceful compared with Punjab. “I never thought that they would attack in Peshawar,” he says.

The future looks bleak. “After this the big question mark,” as Mr Saraj puts it. “Pakistan’s Christians are poor,” he says. “They are daily labourers, they are street cleaners. Now they are very sad and traumatised. They have no idea what to do or what is their future.”