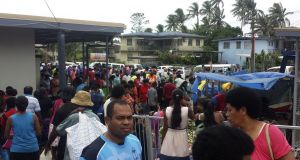 Residents gather at a market as they prepare for Cyclone Winston in the Fijian town of Nausori. Photograph: Kris Parsad/AFP/Getty Images

Fiji declared a nationwide curfew on Saturday, as airlines suspended flights and the prime minister warned people to seek refuge from a cyclone that could prove to be the Pacific island nation’s most powerful on record.

After twice hammering outlying islands in nearby Tonga last week, Cyclone Winston re-intensified and began to track west towards Suva, the capital of Fiji, packing winds of 230kph (143mph), with gusts of up to 325kph (202mph).

“We cannot afford to be complacent,” it quoted the prime minister as saying. “And I am especially concerned that some people in urban areas do not appear to have heeded the warnings about the seriousness of the threat.”

A nationwide curfew has been imposed, the government said on Facebook.

“A total public curfew will take effect across the country today from 6pm,” it added. It issued a list of 758 evacuation centres across the nation of just under 900,000 people.

As Fiji’s weather service warned people in the east to “expect very destructive hurricane-force winds,” Suva resident Alice Clements said the power had failed just after 5pm and she expected water supplies to be hit next.

“I have palm trees flying all around me at the moment,” Ms Clements, an official with a UN agency, told Reuters.

The UNs Office for the Co-ordination of Humanitarian Affairs (OCHA) said Winston was following a path that might spare Suva the full force of its winds, rated as category five, the highest ranking on the hurricane wind scale.

“The cyclone has tracked further north than expected over the past 24 hours,” the UN agency said.

Airlines Virgin and Jetstar suspended flights into and out of Fiji’s international airport at Nadi, while the national carrier suspended all flights.