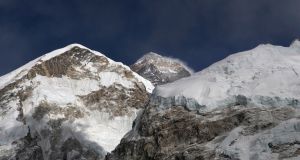 Nepali sherpas have found four climbers dead in their tents on Mount Everest, officials said on Wednesday, taking the death toll on the world’s highest mountain to 10 in the past month.

The climbers were found overnight in two tents at Camp Four, at 8,000 metres (26,246 feet), according to Mingma Sherpa of the Seven Summit Treks group, to which the sherpas belonged.

The identities of the four remained unknown as none of the expeditions on the mountain reported any of their members missing and the head of the Nepal Mountaineering Association said they may have been climbing on their own.

“It is possible that some individual climbers obtained permits and were climbing without much support due to the cost factor,” said Ang Tshering Sherpa.

“It was windy and very cold in the mountain yesterday [Tuesday]. It appears they died due to suffocation as they must have been using a stove to keep warm inside the tent.”

The Himalayan Times reported that two of the dead were foreigners, but did not give their nationalities.

“It is most likely they died from carbon monoxide poisoning by using their stoves in the tent without proper ventilation,” US climber Alan Arnette, who blogs on Everest, said in a post.

The sherpas who discovered the bodies were on their way to retrieve the body of Vladimir Strba of Slovakia who died near the 8,850 metre summit over the weekend.

Strba’s body has been brought down to Camp Two at 6,400 metres and was expected to be taken to base camp later on Wednesday, Mingma said.

More than 5,000 climbers have scaled Mount Everest since it was first climbed by New Zealander Edmund Hillary and sherpa Tenzing Norgay in 1953. Nearly 300 have died trying.

Many of the victims remain on the mountain, entombed in snow, as it its too difficult to bring their bodies down.

But the biggest killer in recent years has been avalanches.

Eighteen people died in 2015 when a 7.8 magnitude earthquake triggered avalanches which smashed into the base camp.

A year earlier, 16 sherpas hauling gear for climbers to higher camps were killed when they were hit by an avalanche while they were crossing the treacherous Khumbu Icefall, just above base camp.

In addition, hundreds of sherpas climb the mountain or help others to do so.

Permit fees are a major source of income for cash-strapped Nepal, which earned more than $4 million this year from Everest permits, officials said.

The climbing season closes at the end of May when the rainy season traditionally begins, bringing cloud and snow at high altitudes.