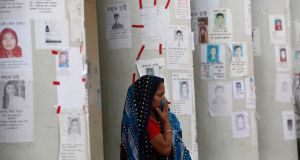 A woman waits for news of her relative, a garment worker, who is still missing after the collapse of Rana Plaza building, in front of missing people posters in Savar, outside Dhaka. Photograph: Andrew Biraj/Reuters

The European Union is considering trade action against Bangladesh, which has preferential access to EU markets for its garments, in order to pressure Dhaka to improve safety standards after a building collapse killed hundreds of factory workers. Duty-free access offered by Western countries and low wages have helped turn Bangladesh's garment exports into a $19 billion a year industry, with 60 per cent of clothes going to Europe.

But any action by the EU on Bangladesh's duty-free and quota-free access would require the agreement of all member states and could take more than a year to implement.

"The European Union calls upon the Bangladeshi authorities to act immediately to ensure that factories across the country comply with international labour standards...," the 27-nation bloc said in a statement issued by EU foreign policy chief Catherine Ashton and trade commissioner Karel de Gucht.

The Swiss-based IndustriAll Global Union, which represents 50 million workers worldwide, yesterday set a May 15th deadline to finalise with Western retailers a commitment to a fire and building safety plan for Bangladesh.

"Funds will be made available for inspections, training and upgrades of dangerous facilities," it said in a statement and called on retailers to renegotiate contracts to pay suppliers more in order to guarantee living wages for workers and to enable technical upgrades to factories. About 3.6 million people work in

Bangladesh's garment industry, making it the world's second-largest apparel exporter, behind China. The industry employs mostly women, some of whom earn as little as $38 a month.

Anger in Bangladesh has been growing since the illegally built Rana Plaza in Dhaka's commercial suburb of Savar collapsed last week, killing 402 people in the country's worst industrial accident.

There were about 3,000 people inside the complex, which was built on a swamp, when it collapsed. About 2,500 people have been rescued, but many remain unaccounted for. "Why are they taking so much time to pull out bodies?" asked a grief-stricken father who, like many others, has been waiting on the streets near the collapsed factory, hoping for information about his son.

Preparations were being made today for the mass burial of around 40 people who cannot be identified. Several thousand workers rallied in the capital to mark Labour Day, and demanded capital punishment for those responsible for the tragedy.

"The owner of the building ... should be hanged to death and compensation should be given to the injured and those who died," said labour leader Moshrefa Mishu. "A healthy and safe atmosphere should be made in the factories."

About 20 people were injured yesterday as police fired teargas, rubber bullets and water cannon to disperse protesters in Savar calling for the death penalty for the owners of the building and factories.

The building's owner Mohammed Sohel Rana and his father, Abdul Khalek, are among eight people arrested so far, and police are seeking a fifth factory boss, Spanish citizen David Mayor, although it was unclear whether he was in

Bangladesh at the time of the accident.

The factory collapse was the third deadly incident in six months to raise questions about worker safety and labour conditions in the poor South Asian country, which relies on garments for 80 per cent of its exports.