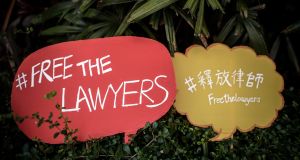 The EU is aware of recent information regarding the serious mistreatment of detained human rights lawyers. Photograph: Philippe Lopez/AFP/Getty Images)

The European Union has issued a rare call for the Chinese government to investigate the serious mistreatment, and possible torture, of human rights defenders, as the situation for lawyers and activists continues to deteriorate.

In a statement, the EU said that it was aware of recent information regarding the serious mistreatment of detained human rights lawyers Li Heping, Wang Quangzhang and Xie Yang.

The lawyers have been in detention since the “709 crackdown” in July 2015, when scores of activists were picked up by the security forces.

Last week Mr Xie’s lawyers said that during recent visits he told of how police had extensively employed extreme sleep deprivation, long interrogations, beatings, death threats, humiliation and other methods of psychological torment to force him to confess and incriminate other lawyers.

One method he described was the “hanging chair”, where he was made to sit on stacked-up plastic chairs with his feet dangling off the ground for several straight hours, so that circulation was cut off to his legs and feet.

“They were threatening to torture me again. They also said: ‘Xie Yang, we’ll torture you to death just like an ant,’” he said in the transcript of an interview with his lawyers.

Mr Xie’s lawyers have since filed a complaint against 10 police officers suspected of torture with the Changsha City People’s Procuratorate in Hunan province.

“If verified, this mistreatment would amount to torture,” the European Union said in the statement, and referred to a previous declaration by its Committee Against Torture in 2015, which had expressed serious concern over reports about the practice of torture and ill-treatment in China’s criminal justice system.

The EU said that based on Chinese criminal law, if the accounts of mistreatment or torture are confirmed, this should result in the punishment of the responsible persons. “In the meantime, all necessary measures to ensure the safety and wellbeing of these individuals need to be taken,” the EU said.

The EU described the release of human rights lawyers Xie Yanyi and Li Chunfu as “a positive step” and repeated its call for the release of those still in detention, including Jiang Tianyong.