Duterte arrives in Beijing with China backing his war on drugs 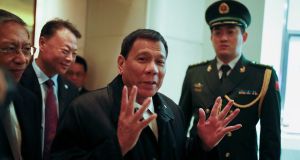 The president of the Philippines, Rodrigo Duterte, arriving at a hotel in Beijing, China, on Monday. Photograph: Reuters/Thomas Peter

Philippines president Rodrigo Duterte has touched down in Beijing at the start of a four-day visit, with China’s support for his war on drugs in sharp counterpoint to the opposition from its traditional allies. This has led to a souring of relations between the Philippines and the United States.

Mr Duterte is keen to forge closer ties with China, as evidenced by an interview with the Chinese state news agency Xinhua in Manila ahead of his visit, in which the controversial leader said “only China can help us”.

While vowing not to give ground on sovereignty issues, Mr Duterte argued that Chinese help in building infrastructure was more important than discussion of the Hague tribunal award in July which found in favour of the Philippines and against China’s ambitions to control vast swathes of the South China Sea.

“There is no sense in going to war. There is no sense fighting over a body of water,” Mr Duterte said, who just six months ago pledged to ride a jet ski to the Spratly Islands and plant a Philippine flag there.

Washington, the EU and the United Nations have all criticised his campaign against drugs, which, according to police data, has claimed the lives of 3,700 suspected drug pushers and users since July 1st, including 1,573 who have died in police operations.

Son of a bitch

He reiterated his tough stance in a TV interview with al-Jazeera shortly before leaving for China, saying: “I don’t give a shit about human rights.”

China is keen to pare back US influence in the Asia-Pacific region, and it sees a great opportunity in warmer ties with the Philippines.

“This will be a historic visit and a new beginning in China-Philippines relations,” Chinese foreign minister Wang Yi said.

In an editorial carried by the Xinhua news agency, China expressed sympathy for Mr Duterte’s war on drugs.

“Beijing will be a ready partner should bilateral ties thaw. China has expressed understanding of Duterte’s priority on the antinarcotics battle, and the world’s second-largest economy is also interested in tapping into the two countries’ respective strengths and cranking up win-win co-operation,” Xinhua said.

The editorial also took aim at the US, saying Mr Duterte had “avoided his predecessor’s idiosyncrasies of colluding with outside meddlers and making unnecessary provocations”.

Mr Duterte is leading a large business delegation which will be hoping to translate warmer political relations into a raft of business contracts.