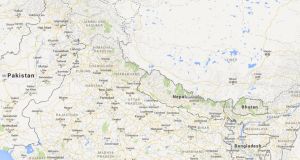 The video in Nepal was shot by German climber Jost Kobusch, as he and his colleagues tried to scramble out of the path of the avalanche.

Dramatic video footage has emerged showing an avalanche, which resulted from the Nepal earthquake, crashing into Everest base camp.

The avalanche is believed to have killed at least 18 people.

The video was shot by German climber Jost Kobusch, as he and his colleagues tried to scramble out of the path of the avalanche. It smothered the base camp site in a blanket of ice and snow.

“It is very sad to hear the continuing tragic news and of loss of life both on the south side of Everest, in Kathmandu and the rest of Nepal,” said climber and expedition leader Dan Mazur, from Bristol. “Our thoughts go out to the families of all those affected.

“Activity on the mountain above (Advanced Base Camp) has been suspended for five days from yesterday, so most teams are now either at Base Camp or on their way here.”

Sean James, who described himself as being “stranded” at Base Camp, told Sky News: “It is very worrying. In the past 48 hours we’ve been experiencing tremors and shocks. We’re not allowed to set foot on the mountain. The road to Kathmandu is blocked. We feel isolated here.

“We really don’t know what’s going on, we’re stranded here. The only good thing is we have a (phone) connection.”