China to cut coal use to reduce pollution 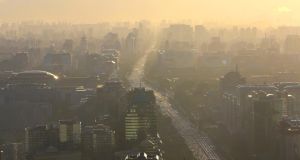 Vehicles are seen during rush hour in Beijing. China has unveiled a slew of measures to curb a choking pollution problem. Photograph: Jason Lee/Reuters

China has pledged to cut coal consumption, close steel plants and reduce the number of cars on the roads as part of its efforts to tackle smog and gradually reduce heavily polluted days within a decade.

China consumes half the world’s coal, is the world’s largest power market and its largest carbon dioxide emitter but the plan aims to cut the country’s total coal consumption to below 65 per cent of its total primary energy use by 2017, part of efforts to accelerate the adjustment of its energy structure and increase clean energy supply.

Sustainability
“Ensuring clean air affects the sustainability of economic growth and the ability to fulfil the dream of the great renaissance of the Chinese nation,” the council said.

The council’s plan expands on premier Li Keqiang’s pledge in March to clean up pollution, which has become the leading cause of social unrest in China.

Concentrations of the most damaging particulate matter in Beijing soared in January to almost 40 times the World Health Organisation’s recommended level as a toxic cloud of pollutants settled over the city and large parts of north China last winter, the so-called Airpocalypse that prompted calls for government action.

The authorities aim to cut the concentration of PM2.5, the fine particles that pose the greatest health risk, by 25 per cent in Beijing, Tianjin and surrounding Hebei province by 2017 from 2012 levels. They will also try to reduce concentrations by 20 per cent in Shanghai and the Yangtze delta and by 15 per cent in southern China’s Pearl delta, according to the plan.

By 2017 the total capacity of China’s nuclear power reactors in operation will have reached 50 million kilowatts, and the share of non-fossil fuel energy will have risen to 13 per cent in overall primary energy use, it added.

China’s projected electricity consumption growth is 5 per cent per year, equivalent to 88 gigawatts every year. To put that in context, that is the equivalent of adding the total installed capacity of the UK every year.

The government has boosted targets for solar power and other renewables to try to improve the situation and head off further unrest about the hazardous environment.