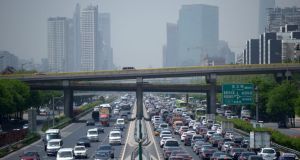 “Over the past 30 years or more, the Chinese government has gradually given more freedom to people in areas of life deemed to be non-sensitive,” says William Nee of Amnesty. Photograph: Wang Zhao/AFP/Getty Images

China has issued a draft of a wide-ranging law on national security, which includes calls for cyberspace sovereignty but also covers everything from finance and politics to the military.

The proposed legislation has human rights activists worried about a further erosion of the rights of individuals.

The law was originally envisaged as dealing with “harmful moral standards” in a number of areas of risk.

A newly-established national security commission, headed by President Xi Jinping, has defined China’s security as covering an extremely wide range of areas, including politics, culture, the military, the economy, technology and the environment.

The full text of the draft, which had its second reading at a National People’s Congress Standing Committee session last month, was posted on the NPC’s website last week for public consultation.

According to Xinhua, the Bill includes clauses that deal with “important industries and sectors deemed vital to the economy, which would prevent financial risks through the development of financial infrastructure and capabilities, and a grain security system”.

Human rights group Amnesty International fears the definition of national security in the draft rules is too broad and would further inhibit people’s right to freedom of expression.

“This time the devil is in the lack of detail,” said Amnesty’s China researcher William Nee.

“The Chinese government should radically revise its proposed legislation on national security to make it consistent with international law and the protection of human rights.

“However, this law seems to be seeking to aggressively reassert control over many aspects of Chinese life in the name of national security.”

China has of late pushed a wave of policies to tighten cyber security after former National Security Agency contractor Edward Snowden, who holed up in a Hong Kong hotel before moving to Russia, disclosed that US spy agencies planted code in American tech exports to snoop on overseas targets.

This demands that China’s security apparatus adapt to changing conditions at home and overseas.